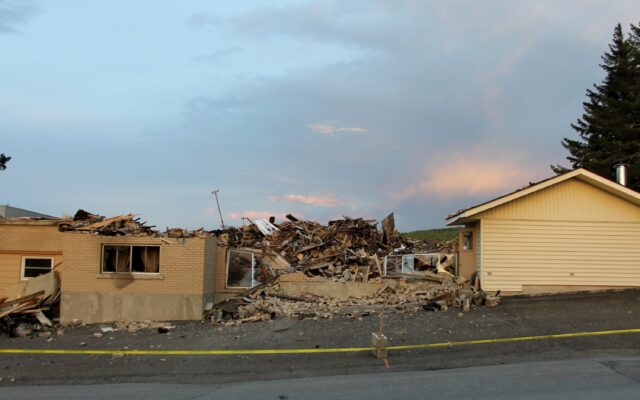 After an apartment fire took everything, tenants seek answers and a fresh start

Hannah Catlin • June 2, 2021
The fire was weeks ago now, but for Robert-Michael Giordano, he loses another part of himself each day. It’s the belongings, both small and large, that he lost -- things he didn’t remember leaving behind when he and his wife, Nicky, fled. Books, blankets, a half-finished painting -- he’ll be in the middle of his day when he remembers something different, and lives the fire over again.

MADAWASKA, Maine — The fire was weeks ago now, but for Robert-Michael Giordano, he loses another part of himself each day. It’s the belongings, both small and large, that he lost — things he didn’t remember leaving behind when he and his wife, Nicky, fled. Books, blankets, a half-finished painting — he’ll be in the middle of his day when he remembers something different, and lives the fire over again.

The Giordanos were two of the 11 tenants displaced by an apartment building fire on May 17. No people were killed in the blaze, but nothing was left of their home. Firefighters had called in an excavator to demolish the building and prevent the spread of the flames.

Now, tenants are processing the loss and beginning to look for a path forward, but it isn’t easy for them while questions about the cause of the fire remain.

The building burned for four hours — from when the tenants evacuated at about 3 p.m., until firefighters extinguished the flames at 7 p.m. — while tenants stood in the street, in the high school parking lot and on a grassy lawn watching.

Several tenants, including the Giordanos, lost pets in the fire. Only one of Robert-Michael and Nicky’s four cats made it out, rescued by a party of daring tenants and neighbors, who reentered the building to try and save the animals.

While Panda survived, his siblings and father died. The Giordanos could only watch in horror. 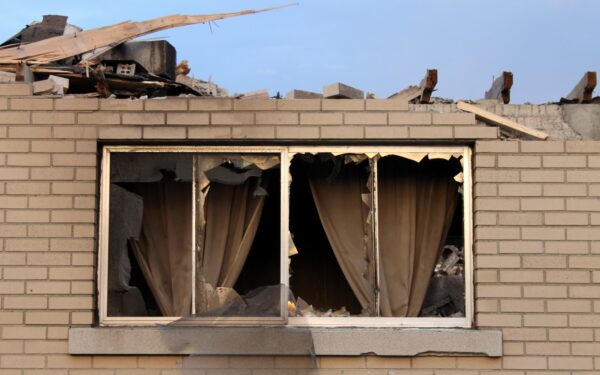 The remains of curtains appear in these broken windows of a Madawaska apartment building on School Street, following a May 17 fire. (Hannah Catlin | St. John Valley Times)

The whole fire is a trauma Robert-Michael doesn’t totally understand yet. He’s still remembering it.

“You couldn’t cry, you couldn’t scream,” he said. “The feeling was just: everything is gone.”

As of now, the Giordanos and one other resident, Bryan Albert, are still residing in the 4 Corners Inn & Suites — where the Red Cross put them up after the fire. At night Albert and Robert-Michael sit outside their rooms and try to remember the series of events.

First, Albert, neighbor Naomi Cyr and a duo mowing the lawn at nearby Maison Acadienne recall hearing explosions at around 3 p.m. — Cyr and Albert both heard three bangs, increasing in volume. At that, everything started moving very quickly.

The lawn mowers — Josh Greene and Shawn Anderson of Greene’s Lawn Enforcement — entered the building and began to try to evacuate tenants. They were followed by Albert, who left his apartment and started knocking on doors.

Before long, a thick layer of smoke had filled the stairwell to the top floor — where the fire had started. This smoke is something everyone remembers: it was the kind of smoke so thick you could hardly move through it, smoke with a foul odor tenants described varyingly as smelling like cat pee or chemicals. Albert came up against it as he tried to move upstairs.

“To go up in that smoke would have killed me,” he said.

Then, once everybody had been cleared outside, Cyr and some of the tenants, including Albert, reentered the building for the cats.

These are the things people agree on. Other details are hazy or vary between residents and witnesses: Did we hear alarms? How many people were in the building at the time of the fire? Parts of the memory are left behind in the rubble, lost like the notebooks and photographs and laptops.

Neither Albert nor the Giordanos were contacted directly by the Fire Marshal’s office, though Albert later called the investigators to report his recounting of events. Both parties said they’re hoping to assist the investigation into the fire that took everything from them.

“I want to know what happened. I want to know the real cause of the fire, and I want some action,” Albert said. “I’m not letting this go.” 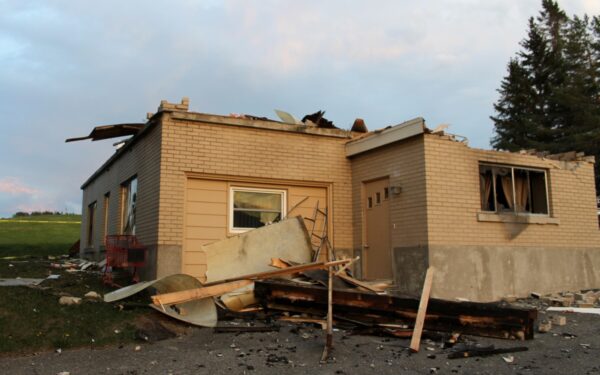 The rubble following a May 17 apartment fire on School Street that stranded 11 tenants and led to the death of several pets. (Hannah Catlin | St. John Valley Times)

The state Fire Marshal’s office said that investigators have not interviewed all of the tenants yet — though a representative said investigators didn’t suspect “foul play.”

Shannon Moss, a public information officer for the Maine Department of Safety, said that “the need for more investigators is a reality” and that the Fire Marshal’s office has had to prioritize “criminal-related investigations.” The office declined to comment further on the status of this investigation or the standard procedure for fire investigations.

Albert — a minimalist — said he has more now than he did before the fire, thanks to community response and aid. He’s looking at houses and thinking about opening a bunk house or group home if he can get the funds to start one.

Meanwhile, the Giordanos are still trying to find an apartment, a task made more difficult by the fact that Robert-Michael uses a wheelchair after an accident just months before the fire left him parapelegic.

The Giordanos await their next steps at the 4 Corners — a stay that’s been funded in large part by donations from Madawaska residents and friends. While tenants have expressed frustrations at the pace of followup from the state, they were quick to thank the members of the Madawaska community for their support efforts.

A clothing and supply drive at the Madawaska Multi Purpose Center was so flush with donations, that residents were able to pick up everything they needed, and the leftover donations are going to Catholic Charities to be distributed to thrift stores in Van Buren, Caribou and Presque Isle.

The 500-millibar upper-level trough associated with the cold front and low pressure that brought last evening's thunderstorms will slowly move over the Valley today and Thursday with a chance for scattered showers and an isolated thunderstorm or two across the Valley this afternoon.
Our Sponsors END_OF_DOCUMENT_TOKEN_TO_BE_REPLACED