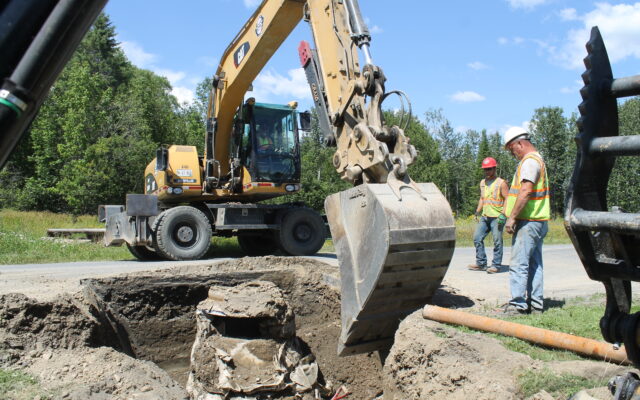 Jessica Potila, SJVT / FhF Staff Writer • May 28, 2021
A wastewater treatment facility that serves two St. John Valley towns is in dire need of repair to the tune of more than $1 million and officials are seeking funding to fix the structure.

FRENCHVILLE, Maine — A wastewater treatment facility that serves two St. John Valley towns is in dire need of repair to the tune of more than $1 million and officials are seeking funding to fix the structure.

The Frenchville wastewater treatment facility, built in the early 1990s, has served that town and neighboring St. Agatha since 2013 when the municipalities entered into a cost savings agreement to share waste disposal services.

St. Agatha, struggling to maintain its own sewer system, agreed to provide user fees to dump sewage through the Frenchville wastewater facility.

“It was all fine and good and then we started having problems with our system,” Frenchville town manager David D. Cyr said.

Surface discharge — sewage sitting on top of the ground — of untreated sewage due to an overflow in the system revealed a need for a costly project to replace a section of sewer force main piping.

Frenchville has secured a $445,000 grant from the Maine Department of Environmental Protection to offset costs of the $1.2 million repair project.

The $758,000 balance is too much for the towns to absorb on their own, so Frenchville has submitted a request for federal funds through the Congressionally Directed Spending Program.

Cyr said wastewater facilities generally hold up well for about 30 years before major repairs are needed. He said that many Maine towns installed theirs in the late 1980s and early 1990s, so now there is steep competition for grant monies to repair the facilities.

The town has already applied for and been passed over for one grant.

If more outside funding is not secured, the towns will suffer, Cyr said.

Any debt service will increase user fees for Frenchville and St. Agatha residents, which is not a viable option for either town, Cyr said.

“Many of them would struggle,” Cyr said. “Our demographics are like the rest of Aroostook County — many residents are getting older and are retired and the increase in fees is just something else that would cut into what little discretionary income they have.”

St. Agatha would be responsible for 51 percent and Frenchville 49 percent of any debt service incurred from the project, according to the agreement between the two towns.

“Both towns are responsible for a share of the debt service so the less debt service we can commit to as part of this project the better off both communities are,” Cyr said.

Cyr said he is unsure how the towns would fund the project on their own, or whether that would mean an increase in taxes- a prospect that he said would be unfair to residents with private septic systems.

Frenchville plans to replace the section of sewer force main piping next year.

High pressure is building down from James Bay in Canada today with mostly sunny skies and cooler conditions. Mostly clear skies tonight will allow temperatures to fall into the mid-40s for most of the SJV.
Our Sponsors END_OF_DOCUMENT_TOKEN_TO_BE_REPLACED