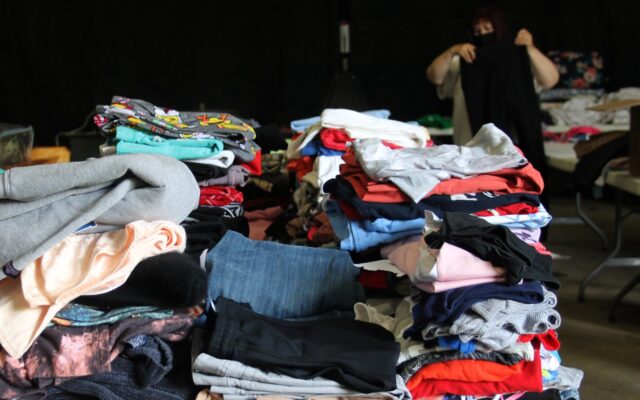 Hannah Catlin • May 26, 2021
Only seconds after an impenetrable wall of smoke forced residents from 143 School St. last Monday, the first community members arrived.

This story has been updated.

MADAWASKA, Maine — Only seconds after an impenetrable wall of smoke forced residents from 143 School St. last Monday, the first community members arrived. It was just before 3 p.m. on Monday, May 17.

The building — an apartment complex housing 11 — would ultimately burn to the ground in a fire still under investigation by the State Fire Marshal’s Office, later

demolished with an excavator to prevent the further spread of flames.

The structure was a total loss, and several pets died in the blaze, which raged until about 7 p.m. Any belongings that remained in the apartments when people fled were destroyed.

“Any fire that strikes, happens without notice, without warning,” Red Cross disaster program manager Eric Lynes said. “It has literally stripped our clients of their security, some of their financial stability — it is the unthinkable.”

Bob Bouchard, a 10-year veteran Red Cross volunteer who responded to Monday’s fire, said that organization not only funded temporary shelter at the 4 Corners Inn & Suites (formerly known as the Gateway Motel) for former residents, but also medications that had been destroyed — the things people don’t think to grab when fleeing a burning building.

Some of the first people at the fire were two men from Greene Lawn Enforcement — Josh Greene and Shawn Anderson — who had been mowing nearby at La Maison Acadienne when they heard a window blow out at the building and ran to knock on doors, and help evacuate tenants, Maison community manager Theresa Albert said.

“It was the right thing to do. It’s just what you would do in a situation like that,” Greene said.

Neighbor Naomi Cyr, who was at the fire for its duration, said that nobody thought the blaze would last as long or be as devastating as it was — in the confusion, somebody kept saying the residents would be able to re-enter in just a few minutes.

“Nobody thought it was going to burn for four hours,” Cyr said, choking up.

Cyr — who had heard explosions from the fire from her nearby home — was one of the first on scene, showing up before even the fire department had arrived. Residents had only just left the building, and Cyr and several others re-entered the burning building a number of times to try and save several cats trapped in an apartment — only one cat made it, corralled by another resident who led the search. 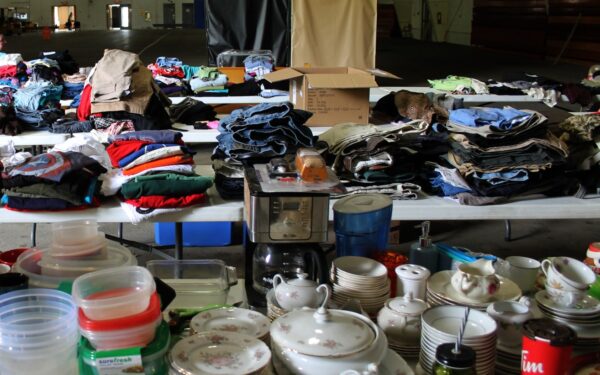 MADAWASKA, Maine — May 20, 2021 — Clothes and other household wares stacked and sorted on tables in the Multi Purpose Center. Dozens of Madawaskans donated these items after earlier that week, a fire destroyed the homes of 11 people living in an apartment complex. (Hannah Catlin | St. John Valley Times)

Meanwhile, Cyr’s son, Suni Saint-Cyr, 10, made several trips to collect water, food and other supplies for tenants. Saint-Cyr offered his personal laptop to one of the tenants who lost theirs in the blaze.

Throughout the evening, the people of Madawaska came by, offering everything from cases of water to cigarettes to the distraught residents, Cyr said.

In the hours and days that followed, there was a groundswell. Local businesses like Paradis Shop N’ Save and Dollar Tree offered gift cards to those affected. St. Thomas Pantry in Madawaska came forward to provide food. People from Bangor and Caribou donated furniture and money. Carmen Lopez from Liz’s Closet helped the Red Cross provide clothing.

Madawaska resident Jessica Blalock started a call for a clothing and supply drive on Facebook. At first, the town offered the Public Safety building for donations, where Madawaska Police Officer Jessica Page helped sort the clothes, but the space was quickly overwhelmed, and the drive moved to the Multi Purpose Center.

On Thursday afternoon, just a few days after the fire, dozens of people had donated clothes, and tables sprawled in the Multi Purpose Center with men’s and women’s clothing, as well as a number of toiletries and other practical items donated by La Maison Acadienne.

“Before I knew it, it snowballed and everyone was contacting me,” Blalock said. “I can’t thank people enough for helping.”

Throughout the day on Thursday, volunteers came to sort the clothing and load the victims’ cars with donations. There have been more than enough clothes donated now, but Blalock said that in the coming days and weeks, as victims find new homes, furniture and household items will be needed.

Bryan Albert, one of the former residents of the building, joked that his wardrobe was better now than it had been before. And with the $2,500 he raised on Facebook, Albert hopes to find a new place to live and to start his life again.

Robert-Michael and Nicky Giordano, also former tenants, said that in the days following the fire, the support from the community has been the one upside of the situation.

“The community output is absolutely amazing,” Robert-Michael Giordano said. “You see it happening sometimes, but you don’t really see it until it happens to you.”

Giordano, who uses a wheelchair, has been helped to and from appointments and errands by another helpful local, Lisa Daigle. Giordano said he’s especially grateful for Daigle’s and Cyr’s time in the past week.

“It’s how our community should be,” Cyr said. “Because it could have been any of us. Wouldn’t you want someone to do it for you?”

As of Tuesday, May 25, all but three tenants had relocated out of the 4 Corners, either into a new residence or a family member or friend’s house.

The Red Cross is currently accepting new volunteers. Bouchard and his wife, Colette, who also responded to the fire on Monday, are the St. John Valley’s only Red Cross disaster responders. The next closest responder in the region is in Caribou.

CORRECTION: A previous version of this story misidentified the hotel at which fire victims stayed. They stayed at the 4 Corners Inn & Suites.

All five candidates running for two seats on the Fort Kent Town Council gathered at a live question and answer forum.
Our Sponsors END_OF_DOCUMENT_TOKEN_TO_BE_REPLACED