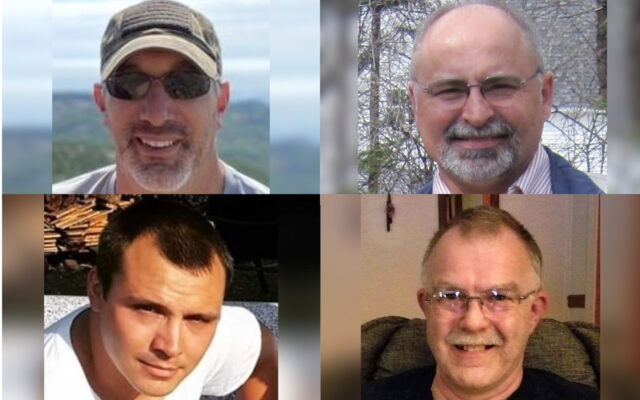 Hannah Catlin • May 21, 2021
With Laurie Gagnon resigning earlier this month to pursue a new job opportunity and Dan Daigle also stepping away at the end of his term, there are two vacant select board seats in Madawaska going into this election season.

MADAWASKA, Maine — With Laurie Gagnon resigning earlier this month to pursue a new job opportunity and Dan Daigle also stepping away at the end of his term, there are two vacant select board seats in Madawaska going into this election season.

Four candidates are pursuing two three-year terms on the board this year: Chris Braley, Richard Dionne, Andrew Dube and Gary Dufour. All long-time Madawaska residents, they also share a commitment to shake up the board, and give new direction and purpose to the town.

On June 8, voters can choose who will help lead Madawaska in coming years. Voting will take place between 8 a.m. and 8 p.m. at the Multi Purpose Center.

Mini profiles of the candidates including their experience and platforms are below, with candidates appearing in alphabetical order by last name.

Currently the chair of the finance committee, Chris Braley is already familiar with some of the work of the board of selectmen. Braley said he is a candidate without an agenda, whose main goal is to be a representative of Madawaska’s people and values.

“I am not afraid of challenges and always do my best to be well informed with facts before acting,” Braley said. “I have been a part of this community [that] supports [its] cultural history, and our local businesses. Family, values and respect. It’s the change we need.”

A veteran of the U.S. Army, Braley moved to Madawaska in 2003, and has raised his two sons here. He now works as a safety representative at Twin Rivers Paper Co. mill. Braley said that while he may not be from Madawaska originally, the town’s future is of the utmost importance to him — in two years he will have lived in Madawaska longer than he did his hometown and his children plan to stay here as well.

Braley was inspired to run because he said the current board doesn’t represent the values of Madawaska residents and their shared history.

“We should be proud of where we came from, and optimistic about our future,” Braley said. “It can’t be done when the energy spent by the elected officials are spent on items that cast negativity and shadows on our community. It’s actually embarrassing to watch some of the disrespect and lack of direction I have seen over the past year or two.”

Regular followers of the Madawaska select board will remember Richard Dionne, who served on the board previously from 2002 to 2008 — spending the final two years as chairperson.

Dionne said he had always planned to return to the board after retiring from his decades-long career at Twin Rivers, but was inspired to run sooner than that by friends who wanted him back in a town leadership role. If elected, Dionne is already planning to run for a second term.

His focus is on bringing visitors to town and advertising what Madawaska has to offer to the world: great cultural activities, good people and family businesses. Dionne said being one of the four corners of the U.S. is a bonus, too.

“I would like to make Madawaska a destination, advertise that,” he said.

He felt that the board needs to recapture a sense of community if it wants to make a real difference for residents.

“You have to make the board realize that individually, we can’t make a difference but collectively we can do a lot,” Dionne said. “You can’t get everything your way but you have to partner with others to get something done. This board currently seems to stand alone … We need to stop this negativity and the distrust and everything else.”

First priority: Implementing a training for all members of the select board in their roles and responsibilities. When Dionne was on the planning board, he said that group went through an introductory training that improved its ability to function efficiently.

Candidate Andrew Dube believes his experience as Madawaska’s code enforcement officer, his training as a tax assessor and his education in public administration will make him a great choice for a seat on the board. He said he’s already familiar with policy-writing and meeting rules, and won’t face a steep learning curve.

His experience attending planning board meetings and working with residents shows through in his policy ideas as well. Dube said he wants to focus on deregulating construction to allow more residents to invest in their properties without municipal oversight.

Dube said voters can count on him to listen and to de-escalate any conflicts that might arise.

“They [voters] can certainly expect a level of respect and a tone that’s very empathetic to their needs,” Dube said. “Oftentimes, issues are through miscommunication. After you unravel that, I find that I can come to some kind of agreement between disagreeing parties.”

He said this attention to personal relationships has been lacking on the current board of selectmen, and it’s a trait he said he will represent should he be elected.

“We have to bring back a certain level of civility where we can disagree without being crass or resorting to ad hominem attacks,” Dube said.

First Priority: Recalibrating the land use codes to encourage residents to invest in their properties. Dube said this will improve access for residents on the front end as well as benefit the town on the back end through property taxes.

Gary Dufour has been waiting for his moment to run for the select board — now, he says, is his time. Dufour has been a member of the planning board, the chamber of commerce, the rotary club and the Knights of Columbus.

Fiscal responsibility is a No. 1 priority for Dufour, and he hopes to streamline the budget to cut back on extraneous spending. Dufour said reevaluating the roster of town staff is one way he would consider reducing the budget and therefore property taxes.

His other main priority is being the voice of the townspeople, Dufour said.

“The biggest thing I’m looking forward to is to be a spokesperson for the people of the town of Madawaska,” Dufour said. “To be able to bring forth to the board the concerns of the people or groups of the town to address them and make sure it’s a balance between what’s a need and what’s not a need.”

Dufour said even if people don’t know him, he will do his best to represent their needs to the town’s government.

First Priority: Rearranging the budget to remove extra expenses and reallocate money into the budgets for road and infrastructure repair. Improving the state of Madawaska’s roads is something he believes the townspeople have been asking for, Dufour said.

Maine’s longest serving legislator, Martin was first elected to the Maine House of Representatives in 1964 when he was 23.
Our Sponsors END_OF_DOCUMENT_TOKEN_TO_BE_REPLACED