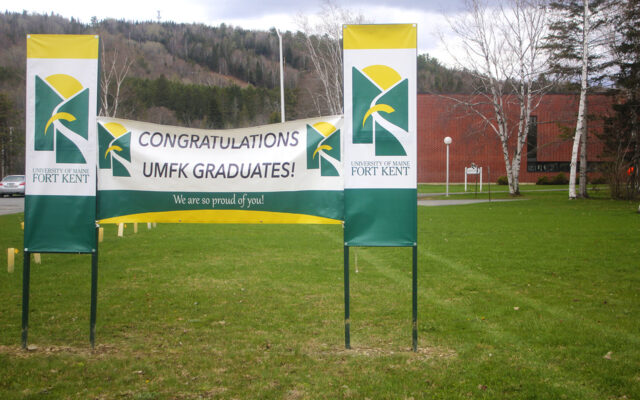 Jessica Potila, SJVT / FhF Staff Writer • May 9, 2021
Though they could not walk across the auditorium stage to receive their diplomas, the Class of 2021 celebrated the University of Maine at Fort Kent’s 139th commencement via videoconference on Saturday, May 8.

FORT KENT, Maine — Though they could not walk across the auditorium stage to receive their diplomas, the Class of 2021 celebrated the University of Maine at Fort Kent’s 139th commencement via videoconference on Saturday, May 8.

All UMaine System campuses will hold their graduation ceremonies online this year due to the pandemic.

UMFK President Dr. Deborah Hedeen greeted graduates and acknowledged the many challenges they have faced since COVID-19 changed the world last year.

“These outstanding students have maintained a positive attitude and performed in extraordinary ways in order to accomplish their goals,” Hedeen said. “They will thrive in their careers because of this unique mindset acquired during the pandemic.”

Author, journalist and educator Kathryn Olmstead was commencement speaker and received an honorary doctoral degree from the UMaine Board of Trustees.

She co-founded the quarterly magazine Echoes in 1988, which she later published from her home in Caribou until 2017. She also was a columnist for the Bangor Daily News and is a member of the Maine Press Association Hall of Fame.

Most recently she is the author of True North: Finding the Essence of Aroostook, which contains many of her BDN columns and some from Echoes magazine. She co-authored a WWII memoir, Flight to Freedom: World War II Through the Eyes of a Child, and was editor of Stories of Aroostook: The Best of Echoes Magazine.

She met with UMFK Class of 2021 members from Canada, California and Connecticut before preparing her commencement address.

According to Olmstead, the students she talked with “were unanimous about three facets of their college experience: personal growth, friendly people, and beautiful surroundings.”

Olmstead had a poignant message for the students about the impact their time at UMFK will have on their lives.

“Wherever you go, whatever you do, this college, in this place, is part of you,” Olmstead said. “And when, in your life journey, you encounter someone who knows Fort Kent, or even Aroostook County — and it will happen, sometimes in the most unlikely places — you will feel an unspoken bond. You might not even know the person, but you will know what you share.

“Because this small-town, small-campus chapter in your life, in a place that is friendly and beautiful, has given you an identity – an awareness of who you are – that you would not have gained in a larger place,” Olmstead added. “The person you become going forward will be stronger because of the person you became at UMFK.”

UMFK conferred degrees upon 229 students from eight different countries and 14 different states. The degrees included  211 bachelor’s degrees, 78 percent of which were nursing degrees and 20 associate degrees.

The University of Maine 2020 and 2021 classes will be invited to march in a live joint commencement next May.

High pressure is building down from James Bay in Canada today with mostly sunny skies and cooler conditions. Mostly clear skies tonight will allow temperatures to fall into the mid-40s for most of the SJV.
Our Sponsors END_OF_DOCUMENT_TOKEN_TO_BE_REPLACED