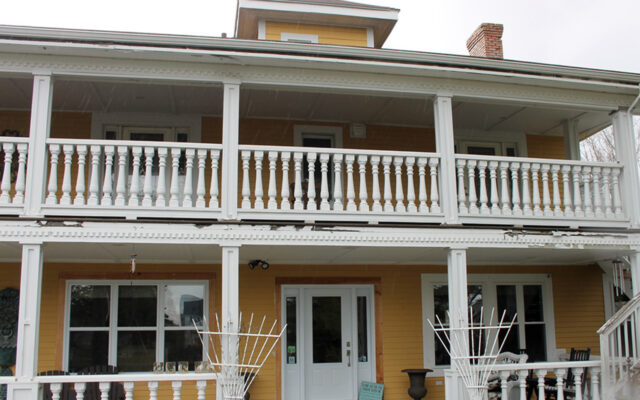 Despite past dispute with town, Fraser mansion will open for business

Hannah Catlin • May 7, 2021
It’s been 10 days since Linda Pelletier moved back to Madawaska from her winter residence in Florida, but the Fraser mansion already bears her marks: a distinct pink paint job in one of the bathrooms and an amethyst-encrusted bull skull she crafted herself among them.

MADAWASKA, Maine — It’s been 10 days since Linda Pelletier moved back to Madawaska from her winter residence in Florida, but the Fraser mansion already bears her marks: a distinct pink paint job in one of the bathrooms and an amethyst-encrusted bull skull she crafted herself among them.

After buying the mansion in February, Pelletier got off to a rocky start with the town government — with the two parties unable to settle on a sale price for liened kitchen equipment. At the time, she was uncertain if she would come back to town at all.

Pelletier said the positive feedback she got from the community during and after the dispute with the town encouraged her to come back, even though she was considering giving up.

“It really caught me by surprise,” she said. “It was humbling — it’s the only expression I can say.”

Since Pelletier announced on Facebook she would return, she’s received private messages from locals and former guests alike. One group of guests from New Jersey who used to visit has already requested the first reservation in the new dining room.

Pelletier and her husband, Robert, owned and ran the mansion between 2014 and late 2015, before a fire led the couple to sell. Now, they are working full time to restore and renovate the historic 1928 mansion, which has been empty for almost two years since the most recent occupant, Orchids restaurant, went out of business.

Led by Robert, an ex-road builder, the restoration is beginning to take shape with fresh coats of paint, pressure-cleaned kitchen equipment, and the mending of some of the damage that remains from the fire. The reopened Fraser mansion will feature “north land” inspired decor — taxidermy and antlers.

“We’re going to bring [the mansion] back to its grandeur,” Linda Pelletier said.

In one pair of rooms, Pelletier will serve fine cuisine several nights a week — five- and occasionally seven-course meals, by reservation only. In the main dining area, she plans to have more casual pub fare, open for anyone to drop by.

For Pelletier, the excitement has compounded since she’s returned to Madawaska.

“It’s time to move on and put the town [dispute] behind us,” she said.

A broad area of low pressure crossing the state will bring widespread rainfall to the entire SJV today and tonight. Rain tapers to showers Thursday morning with showers lingering into the evening hours as the low lifts to the northeast.
Our Sponsors END_OF_DOCUMENT_TOKEN_TO_BE_REPLACED