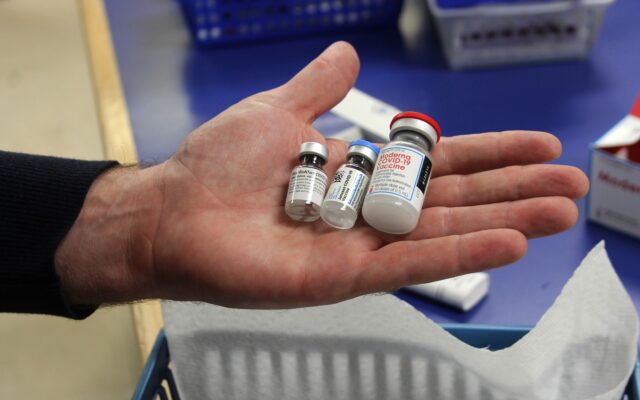 But with many of those who wanted vaccinations in the first place fully immunized — the County has to date vaccinated nearly 40 percent of its population —  Pelletier is now the one making the calls.

Fish River hosts weekly vaccine clinics. At Saturday’s clinic, Pelletier was prepared to deliver 200 shots of the Moderna vaccine. Instead, only 80 patients came.

“Now I have the vaccines,” Pelletier said. “Now I have to find people who are still interested.”

Nearing the halfway point in its vaccination effort, northern Maine health care providers are facing down vaccine hesitancy and other barriers to herd immunity.

A big blow came with the Johnson & Johnson pause, which finally came to an end last Friday, April 23. The pause began on April 13 after reports of rare blood clots began to surface — hampering vaccine efforts in rural areas, which had counted on the one-dose shot to bolster turnout to pop-up clinics like a mobile unit run by the Federal Emergency Management Agency. 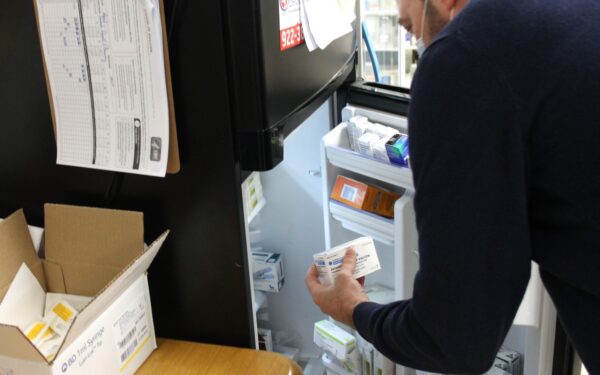 John Hebert, owner of Hebert Rexall Pharmacy in Van Buren, returns a box of Johnson & Johnson vaccine to its cold storage unit. The doses are some of those left in Hebert’s fridge during the 11-day Johnson & Johnson pause. (Hannah Catlin | St. John Valley Times)

Of the more than seven million people who have received the single-dose shot, the Centers for Disease Control and Prevention has identified 15 patients who experienced the blood clot side effect within two weeks of receiving the shot, all of them women. Two of the women have since died.

Given the rarity of these adverse outcomes, however, analysts from the CDC and Food & Drug Administration declared the vaccine was indeed safe and effective — good news for health care providers in the St. John Valley, who relied in part on the Johnson & Johnson vaccine for its efficiency.

But at the same time, questions about the shot’s reliability reignited questions from people wary of the vaccines to begin with. John Hebert, owner of Hebert Rexall pharmacy in Van Buren, said that without a doubt, vaccine hesitancy is the biggest hurdle for vaccine providers right now — and the pause contributed to that discourse.

“You have people who think the CDC and FDA acted too quickly and others who say doesn’t this pause show the vaccine wasn’t safe to begin with,” Hebert said.

Hebert said he hoped the public took heart in the fact that the scientists responsible for monitoring vaccinations reacted quickly and conservatively and still decided the treatment was safe. But he knows that’s not how everyone will interpret it.

Working closely with local hospitals, Hebert said that the next stage of the vaccine rollout will be primarily focused on public service announcements and educational efforts, but that the concerns people have about the vaccines run the gamut from questions about mRNA technology and the vaccine development process to those who question COVID-19’s existence in the first place.

For some, Hebert said, realization about the vaccine’s importance comes too late.

“Unfortunately for a lot of people that ends up being a tragic experience,” Hebert said.

He’s taken a case-by-case approach, speaking face to face with as many people as possible to address their unique concerns. Hebert frequently travels to nursing homes to deliver vaccines, and said that sometimes humor and personability make all the difference.

At one nursing home, Hebert said, he met a gentleman who complained the vaccine might cause him to grow a third arm.

And the man laughed and allowed Hebert to administer the vaccine.

All of that said, health care providers say that having Johnson & Johnson back is a good first step.

Pelletier said that many working people had specifically requested the shot because it would only require one appointment. It also made distribution easier to manage. With less total vaccines to distribute, Johnson & Johnson clinics needed less staff and less storage. Plus, Johnson & Johnson vials contain fewer doses, meaning fewer people need to be interested in vaccinations for a clinic to justify opening a bottle of vaccine.

“A two dose series — it’s not that it’s impossible, but there’s a lot more logistics,” Pelletier said. ”For us, the J & J had really opened up some more options.”

Now that the Johnson & Johnson is back and available, Pelletier will spend this week trying to gauge if there’s still enough interest in the shot to order more. Now that the most interested people have been vaccinated, the challenge will be finding willing participants in the remainder.

“Until we’re close to herd immunity, I’m not ready to give up,” Pelletier said. “I know there are still those people out there.”

A cold front moves through today with scattered showers that will taper off this evening as high pressure builds into the region with partly cloudy skies.
Crown Politics END_OF_DOCUMENT_TOKEN_TO_BE_REPLACED

All five candidates running for two seats on the Fort Kent Town Council gathered at a live question and answer forum.
Our Sponsors END_OF_DOCUMENT_TOKEN_TO_BE_REPLACED