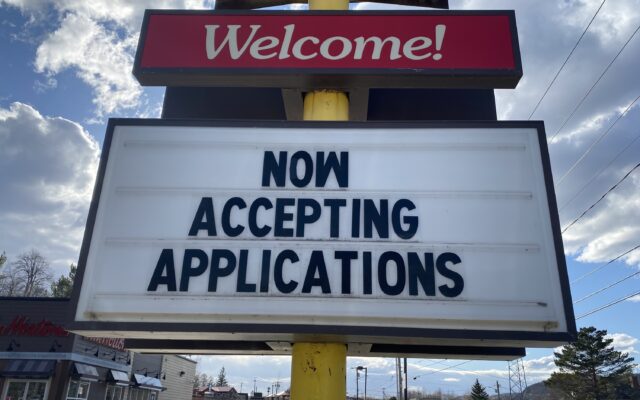 Hannah Catlin • April 23, 2021
Even though customers have flooded to the Madawaska Tastee-Freez since it opened earlier this month, owner Nick Guerrette often has to close the kitchen early.

MADAWASKA, Maine — Even though customers have flooded to the Madawaska Tastee-Freez since it opened earlier this month, owner Nick Guerrette often has to close the kitchen early.

While demand is off the charts at the ice cream and burger restaurant, Guerrette has struggled to pull in full-time employees. Normally, he likes to go into a season with 30 workers. So far this year, he has only 17.

While his announcements of shortened kitchen hours on Facebook have attracted some applicants, the potential workers all have been local students. Guerrette needs employees who can work during the day: adults.

“I’m not sure if this was the stimulus and unemployment, or a greater need for health care,” Guerrette said. “This year has been very challenging.”

Despite last year’s unemployment rate, which spiked across the state for the first time since the 2008 financial crisis, willing employers are struggling to attract workers at the pace they did before. Even though more people are getting back to work, the labor force hasn’t yet reached the levels it did pre-pandemic.

It’s a phenomenon seen nationwide and across all economic sectors — the disparity between a relatively high number of unemployed people and an improving job market. But as of yet, economists, business owners and other experts disagree on the cause of the gap.

In Maine, this disagreement persists. For many employers, like Guerrette, the high unemployment benefits at the state and national levels are to blame for “Now Hiring” signs outliving their welcome in shop windows and on roadside signs across the state.

Right now, federal unemployment is $300 per week and Maine state unemployment caps out at an additional $462 per week — it’s calculated based on the wages a person earned before losing their job. Plus, Congress has issued three rounds of stimulus relief, amounting to $3,200 for qualified people. These checks included additional funds for households with children.

All told, with minimum wage workers in Maine currently earning $486 each week, even just collecting state benefits could be nearly as profitable as working for many Mainers.

The jobs gap expands out of the private sector and into the public sector too, where some employers have the same diagnosis for hiring pains. In Madawaska, at least four departments including the school are hiring for full or part-time staff.

Madawaska water district superintendent Steve Bechard said that he has seen fewer applicants than usual for his department’s two open positions, though they had only been open for about a week and a half.

Like Guerrette, Bechard speculated that increased unemployment benefits during the pandemic might be the major contributor to the slow hiring season.

“This is our first time hiring since the pandemic started, but prior to that, when we did have an open position here, we would normally have half a dozen applications,” Bechard said.

But others aren’t so sure unemployment checks can be blamed for the phenomenon — looking to other pandemic-stressors and long-term labor force losses for the answer.

David Grima is an employment and training specialist with the Maine Department of Labor. He’s based at a Career Center in Rockport, where he said the tourism industry is barely sputtering to a start, with businesses unable to fill positions like they once did.

Grima said he has a lot of empathy for employers who feel unemployment is the root of their hiring troubles, but said that living off unemployment benefits in the long term isn’t realistic, especially as vaccination rates rise, and life — or at least the economy — looks to return to the norm. Plus, unemployment benefits have a 26-week lifespan in Maine, which limits how long any person could actually profit from remaining jobless.

Grima credits Maine’s labor shortage to a number of factors. In the short term, he said COVID-19 absolutely plays a role. When Grima talks to unemployed people, he hears reticence to return to the workforce from workers who are waiting to get their old jobs back as well as those who are still overwhelmed by the health and safety concerns of working during the pandemic.

But a return to normal life will probably not be the cure-all to Maine’s labor problem.

“Personally, my feeling is once the vaccinations are widespread, once people are returning to work and the COVID layoffs and the COVID unemployment [is done], we’ll still find ourselves in the position back before COVID where there’s a labor shortage,” Grima said. “If COVID hadn’t hit, we would still probably be suffering from the labor shortage.”

In the public sector, for example, the state faces shortages of law enforcement personnel both in police departments and corrections facilities, where huge percentages of positions are unfilled across the state. Madawaska is seeing fewer applicants than expected for its open positions too. The town is looking for multiple employees in its water and pollution control departments as well as for maintenance and utility work.

A major factor for Grima is Maine’s aging population, which means fewer young people coming into the workforce every year. This year has certainly been an additional burden on both workers and their employers, but Bechard has seen a long-term change in the interest people have in jobs in Aroostook County.

One of the open positions at Madawaska’s water district is for a summer assistant, a role traditionally filled by a local college freshman or high school senior looking for seasonal work. Bechard said that with out-migration in Madawaska, it’s getting harder to fill roles like this.

“I remember 20 years ago we would get 12 or 15 applications for summer, now I’d be happy to get two or three,” Bechard said.

Clouds are on the increase this morning as a strong low pressure area tracking towards Maine from the Mid-Atlantic approaches with rain spreading across the Valley by the afternoon.
Our Sponsors END_OF_DOCUMENT_TOKEN_TO_BE_REPLACED