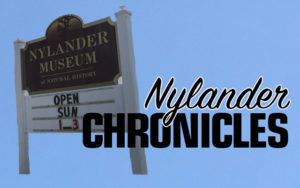 Contributed • April 21, 2021
The first Earth Day, a “teach-in,” was April 22, 1970. The purpose was to put legal and regulatory environmental protections on the federal agenda through an increase in public awareness.

The first Earth Day, a “teach-in,” was April 22, 1970. The purpose was to put legal and regulatory environmental protections on the federal agenda through an increase in public awareness.

At that time, there was no Environmental Protection Agency, no Clean Air Act and no Clean Water Act. Earth Day is now celebrated around the world to demonstrate support for environmental protection.

In Part 1 of Conservation and Preservation in this column, Olof Nylander wrote his concern that little regulation and enforcement existed to sustain nature. He started this topic by writing of human intervention in the Maine forests, and he continued to described the domino effect in the environment.

“The birds that nested in the trees and were local visitors in the summer, could find no places to build nests or rear their young. Insects, so numerous which furnished the feed for these birds, were no longer obtainable, for they had all perished with the wholesale slaughter of trees, which were burned and cleared for farm land.

“Our all year round birds could not live in the open fields as there was no feed or shelter for them, and they had to a large extent been killed by man, to help him sustain for himself, while clearing the land. After the land had been cleared, insects of many species located in other parts adopted the open country of the farms, gradually coming over to the communities and retaliated by eating up man’s grain fields.

“European plants were accidentally imported and established themselves in the soils of the open country, the more hardy taking root in their new homes and spreading so rapidly that they exterminated the cultivated plants in the field, unless man, through his best efforts and hard labor, kept them in check. Women, to adorn their homes and dooryards also imported a number of plants. These seeds were scattered by the winds taking positions in many fields.

“A lady of our village, one time many years ago, brought home and planted in her garden opposite the cemetery, an orange hawkweed, which when in bloom was very attractive. I told her it was one of the worst weeds known to destroy grass fields. Another lady brought some of the orange hawkweed and plants to her home in Perham, where the plants were left to flourish. The dooryard and surrounding land is covered today. It spreads in all directions thereabouts. The orange hawkweed plants send out runners that take complete position of everything of plant life in the open fields. The seeds are light and scattered by the winds in all direction.

“Many of our flower loving friends do not like to go into the wet swamps of the forests where (these) beautiful (native) flowers flourish. Mosquitoes and black flies do their best to suck the blood out of the hands, necks and faces thus tormenting us for trespassing on their domain.

“The only way to preserve our natural resources is to stop fishing, hunting and the demolishing of our forests for some years. Laws will not do much good unless there is an understanding public sentiment to support the project.”

Over 90 years ago, Mr Nylander was describing the conditions and problem solving how to safeguard the beauty and function of northern Maine’s natural environment. Although some restrictions existed prior, the original intent of the first Earth Day resulted in awareness of the need for preservation and conservation. The search for policy to protect without unreasonable restriction continues.

This column is the work of the Nylander Museum Board of Directors.

A broad area of low pressure crossing the state will bring widespread rainfall to the entire SJV today and tonight. Rain tapers to showers Thursday morning with showers lingering into the evening hours as the low lifts to the northeast.
Our Sponsors END_OF_DOCUMENT_TOKEN_TO_BE_REPLACED