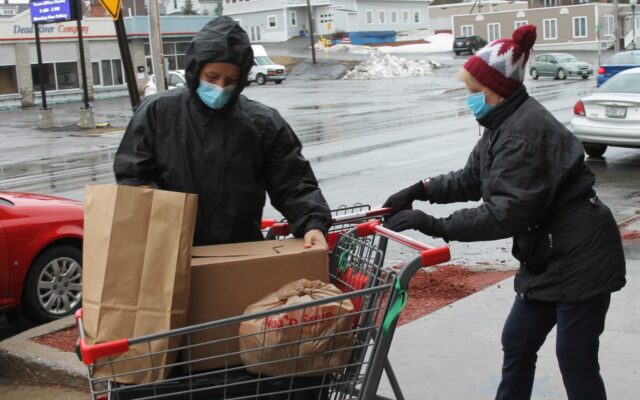 Hannah Catlin • April 4, 2021
St. Peter Chanel Pantry in Van Buren has seen the number of families it serves double since the pandemic from 130 at the start of 2020 to an average of 240 now.

VAN BUREN, Maine — On a bleak day in Van Buren, St. Peter Chanel Pantry Director Nancy Dumond Violette was walking up and down the sidewalk in the freezing rain, singing gospel songs. Dumond Violette and a dozen volunteers were performing the pantry’s monthly food distribution, which has been curbside for exactly one year, since Covid-19 first gripped the world last spring.

The pantry has been around for a long time, originally operating out of the basement of the Van Buren parish of the same name. Now, located in a downtown property it shares with thrift store People Helping People, the pantry has seen the number of families it serves double since the pandemic from 130 at the start of 2020 to an average of 240 now.

According to Dumond Violette, 99.9 percent of the people who come to distributions are from Van Buren and immediately surrounding towns like Cyr Plantation, which would mean the pantry serves roughly 20 percent of the area’s population.

For Dumond Violette it’s still not enough, when the poverty rate hovers around 25 percent.

“Food insecurity is a silent trauma,” she said. “Because it doesn’t yell, it doesn’t call the police, it doesn’t scream.” 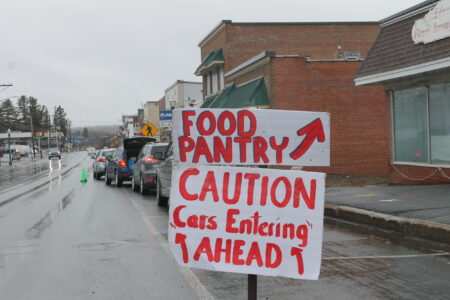 Across The County, food insecurity has been especially acute in the past year. Catholic Charities’ traveling food distributions regularly draw thousands of people looking for assistance.

To help keep up with the demand, St. Peter Chanel pantry has filed for and won a number of grants and seen an additional boost in funds from CARES act support. Father David Cote, the community manager at Rural Resiliency Community Alliance, has written a number of the grants the pantry won this year.

The roughly $20,000 the pantry has taken in in the past year has gone to rewiring its building, installing heat pumps into the freezer room, and purchasing some additional equipment.

“That was absolutely necessary; they couldn’t have continued,” Cote said.

“It wasn’t a huge amount of money,” he continued. “Just a little bit here and a little bit there but it’s certainly helped the foodbank.”

Cote said that the pantry’s work has been essential in the past year.

“If it weren’t for the food pantries, I think there would be a lot of kids and a lot of families hurting in terms of their ability to get the food they need,” Cote said.

But to watch the volunteers at the pantry execute the distribution, you might never guess the sobering reality of the need they face. It’s not just Dumond Violette singing in the rain, but the cheerful greetings first-time volunteer Sandra Cyr tosses into the cars as they pull up. It’s the friendly banter between Jean Bernier and Marlene Poitras as they load shopping carts full of frozen goods to roll up to volunteers packing boxes in the hallway. 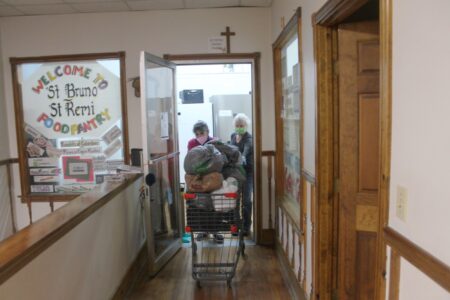 Bernier — a small woman with matching pink shirt, mask and scrunchy — has thrown herself into volunteering, especially since her husband died. She and Poitras tackle the same task every distribution, and the rhythm of their work shows it.

“I love it,” Bernier said, a little choked up. “I love every minute of it.”

The pantry serves more people than show up to curbside distributions, though dozens of cars had lined up at least a half hour before the volunteers were scheduled to start packing trunks with boxes and bags of food. It also distributes to those who are unable to attend and fills emergency needs when people are faced with unexpected shortages.

Long-time volunteer Harvey Beaulieu distributes food boxes to individuals who aren’t able to pick them up from the pantry — mostly seniors and people with disabilities. He said that without fail, the relief and gratitude he’s met with is overwhelming.

“You walk in and it’s like Christmas all over again,” Beaulieu said.

During the curbside distribution, he was responsible for traffic control, and joyfully kept a tally of how many cars hit the curb on their way by — three men and one woman.

It’s not that the volunteers are uncaring or ignorant to the struggles their guests face, it’s part of an active effort on the part of the pantry to break down stigmas against food insecurity and asking for help.

People who attend the distributions are called “heroes” and those who bring food to other families “volunteers.” Dumond Violette explained that the pantry wants to congratulate people on using the resources available to them, and encourage them to be part of the community effort to address needs of all kinds.

Along with food, pantry volunteers distribute bound booklets of health and wellness resources, pamphlets on rent relief and church bulletins.

Beaulieu said he’s learned not to question why people show up to the distributions. He said that even if someone is middle class, you can never know what bills they might be facing or what other hardships could make a little extra food a life-line. 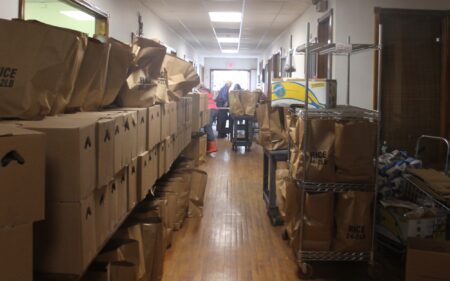 After about an hour, volunteers had served well more than 100 cars, some containing representatives from multiple households. After another 30 minutes where cars trickled in sporadically, they regressed inside to strip off rain pants and soaked gloves and enjoy hot coffee and conversation.

During the pre-distribution huddle, Dumond Violette had dedicated the day’s work as a prayer for the families they served. When it was over, she went around debriefing with each volunteer and wishing them a Happy Easter as they left. For her, attitude is everything — it’s what allows the pantry to continue despite the difficulty of the work.

“You can’t do this without being happy,” Dumond Violette said. “It’s a celebration.”

High pressure moving east will allow southerly flow to set up across the Valley with above normal temperatures across the region. Clouds will increase this morning as a cold front approaches.
Our Sponsors END_OF_DOCUMENT_TOKEN_TO_BE_REPLACED