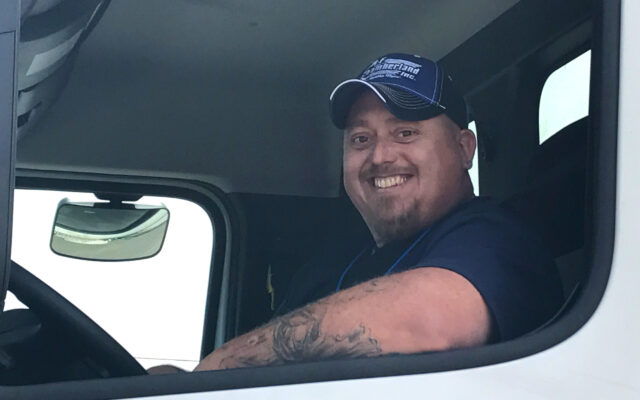 Jessica Potila, SJVT / FhF Staff Writer • March 31, 2021
As COVID-19 decimated many businesses, the nation's truckers were called to deliver, with fewer amenities along the way. For at least one driver and an Aroostook company, it was all part of the job -- and how they did it snagged them a statewide honor.

ST. AGATHA, Maine — As COVID-19 decimated many businesses, the nation’s truckers were called to deliver, with fewer amenities along the way. For at least one driver and an Aroostook company, it was all part of the job — and how they did it snagged them a statewide honor.

Aaron Libby, 46, of Caribou said he knew he wanted to become a truck driver when he was in second grade.

“I remember sitting on a school bus acting like I was driving a big truck,” Libby said. “I always sat in one seat on the right side of the bus. The hump over the tire, that was my throttle, my gas pedal. When the bus would turn, I would look out the window like I was turning.”

But before he became a truck driver, he took on a variety of jobs, including as a roadie for musical acts such as Snoop Dogg and Sugarland.

“I held Snoop’s mic — how many people can say that?” Libby said.

Libby ultimately returned to Aroostook County, where he now drives for R.F. Chamberland Inc., a family-owned business in St. Agatha.

Despite all that the pandemic threw at them, the company snagged the 2020 Grand Champion Award for Safety from the Maine Motor Transport Association. The award is the highest honor MMTA presents to its trucking industry members.

“This award was for 2020, a year when the trucking industry has operated under enormous pressure to keep the grocery stores stocked, and the fuel tanks full,” said Chris Cyr, director of risk management at R.F. Chamberland Inc.

The company beat out major carriers for the award, including Walmart Transportation and Shaw’s Supermarkets.

R.F. Chamberland has 110 employees, and about 80 of those employees are drivers.

“A lot of places were not even allowing drivers to use the restrooms. There are some really unique challenges our guys faced this year due to this pandemic,” Cyr said.

“Under normal conditions, that is a very stressful job for the drivers, and yet through it all, they drove almost 7 million miles last year providing COVID relief all over the United States and Canada without a single reportable accident,” he said.

About 33,000 people made their living in the trucking industry in Maine in 2019, said Brian Parke, president and CEO of the Maine Motor Transport Association, which represents 1,600 motor carriers.

“The roles of not only truck drivers but diesel technicians, everyone that’s playing a role behind the scenes to keep trucks on the road safely, those jobs have always been important and we’ve all taken it for granted,” Parke said.

Parke said that the importance of truckers became obvious right at the beginning of the pandemic, and people’s needs for medicine, groceries and deliveries of online purchases have made people appreciate the trucking community as essential.

Safety is always a priority for drivers, who risk their lives while being on constant watch not to harm others, Cyr said.

Libby said while on the road, he and other truck drivers are consistently engaged in defensive driving, playing out worst-case scenarios in their minds — wondering whether the driver in the vehicle ahead, or to the side, is paying attention.

“We don’t have the luxury of letting our guard down because we don’t have fender benders, we have major accidents. We will put our truck in the ditch without a hesitation, regardless of what happens to us, to protect that family in the other vehicle,” Libby said.

Over-the-road truck driving is a challenge for drivers and their families no matter the year. Bad news is something not easily processed far from home.

“If I’m on the road and the water pipe busts back at the house and there’s water leaking all over the place, I can’t fix that — there’s nothing I can do. If one of the kids is sick, I’m not there to help out. I’m six states away,” Libby said.

“Everyone in my family knows that if there’s bad news, it goes to my wife first. My wife will then determine if I get the bad news or not.”

There is also no telling what truck drivers will encounter far from home, which can sometimes provide an interesting narrative.

“We see all kinds of weird stuff,” Libby said. “I passed an ostrich one time on the road; I don’t know where the ostrich came from.”

“The fact that their essentiality is being focused on throughout the pandemic, we hope will attract more people to careers in the trucking industry,” he said.