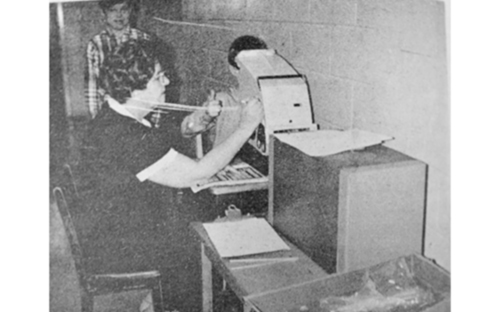 Contributed • March 24, 2021
50 Years Ago -- March 25, 1971     Roland bowls -- Romeo Hebert presented a check to Roland Desjardin on behalf of Local 247, the group that sponsored Roland to the New England Candlepin Championships being in Brewer earlier that year.

Roland bowls — Romeo Hebert presented a check to Roland Desjardin on behalf of Local 247, the group that sponsored Roland to the New England Candlepin Championships being in Brewer earlier that year.

Desjardin, one of the Valley’s best candlepin bowlers, has entered the competition in recent years and has always placed well. In fact, two years ago he placed so well he won $200 for winning the event. He then entered the world’s championships held in New Hampshire, and while not winning a cash award, had an average of 122.

Silver tray for Rose — Miss Rose Gillis received a silver tray in recognition of 28 years in the service of education from Mrs. Rina Labbe. The English department at Madawaska High School chose St. Patrick’s Day as an appropriate time to honor the Irish teacher, at the party which included a social hour and luncheon at the Brothers’ residence in Madawaska.

Quilt of many stories — Sixth grade students in Louise Bouchard and Janice Gereben’s classes created quilt squares as part of their writing unit. After each of the students completed their creative writings, they designed a quilt square as an illustration to their story. Each of the squares were then sewn together by a parent, Wilma Ouellette.

Call center closes — About 40 workers were laid off as Synergy Solutions closed the doors of its Fort Kent call center on Feb. 28, 2011, according to Chief Operating Officer Corey Conklin. The ARizona based company had reopened the center for a five-month contract with a Medicare Part D client from October 2010 to February. The call center hired up to 60 people when they reopened on Sept. 28, 2011, Conklin said. Five months earlier in April, they had closed, laying off about 45 employees.

High pressure moving east will allow southerly flow to set up across the Valley with above normal temperatures across the region. Clouds will increase this morning as a cold front approaches.
Our Sponsors END_OF_DOCUMENT_TOKEN_TO_BE_REPLACED