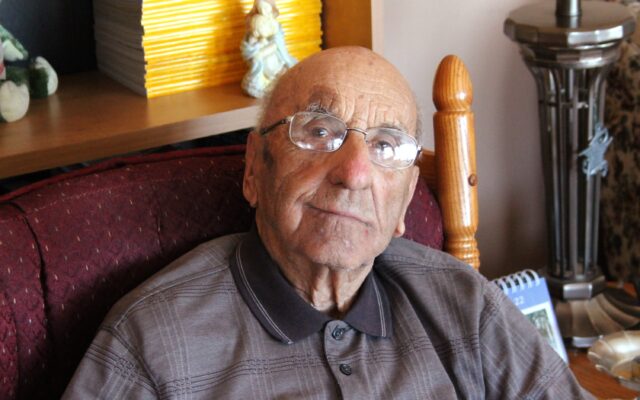 Hannah Catlin • March 23, 2021
Watching Valier Thibeault stroll up his block on an unseasonably warm day in March, you might not guess he’s 101 years old.

MADAWASKA, Maine — Watching Valier Thibeault stroll up his block on an unseasonably warm day in March, you might not guess he’s 101 years old.

He celebrated his landmark birthday on March 21 with breakfast at Chez Helen, visits from friends and family, and of course, a birthday cake. Thibeault said he received dozens of calls congratulating him on his big day.

“The weather that day at this time of the year was unbelievable almost and we had a very nice morning,” Thibeault said. “We enjoyed it.”

It’s Thibeault’s second birthday during the pandemic. Last year, his 100th birthday celebration was canceled due to pandemic safety restrictions. His family, some of whom live as far away as Florida and Louisiana, haven’t been able to visit since then.

Thibeault said he’s never seen another year like this one.

“It’s the worst thing that could happen,” Thibeault said. “It can’t be worse than it is now — people aren’t working, they’ve got no work, money’s not there, all the schools are closed half of the time.”

With both Valier and his wife, Theresa, now vaccinated, they’re hoping to see family sometime this summer, when the government eases travel regulations.

Originally from Fort Kent, Thibeault was a potato and cattle farmer for many years. In 1943, he married his wife and the two had eight children– though one of their sons, Terrence, died from cancer three years ago.

After leaving the farm, Thibeault worked in Fraser Mill for almost two decades, but due to a heart condition, retired in 1976. The first few years of retirement were a touch lonely, as Theresa kept working as a kindergarten teacher at Madawaska Elementary School.

But once they both retired, the two became snowbirds, spending summers in a house they built together on the lake in St. Agatha and the winters in Florida. Since both have gotten older, they’ve settled more permanently in Madawaska — where Thibeault’s sister lives.

Valier Thibeault has always been a gardener — preferring working around the house to other retirement activities. Golf particularly reminded him too much of his farming days.

“I’ve picked up rocks all day, I’m not going to run after a little ball out there.”

Thibeault doesn’t have any particular secret to his longevity, though he did say he’s never been a smoker or a drinker.

“I tried [smoking] when I was about 12 years old,” Thibeault said. “With my sister… she was bringing me with her [so I would not] tell on her… But I didn’t like it and I got sick, so I took the pipe and I threw it down the place.”

He never picked it up again.

Thibeault has had his share of medical scares — last year he fell in his driveway, broke his leg and was transported to a Boston area hospital for surgery. He said the doctor remarked it was his first time operating on a patient who was 100 years old.

While the leg still aches sometimes, Thibeault is otherwise quite healthy, and happy to take a short walk down the street on an early spring day.

The 500-millibar upper-level trough associated with the cold front and low pressure that brought last evening's thunderstorms will slowly move over the Valley today and Thursday with a chance for scattered showers and an isolated thunderstorm or two across the Valley this afternoon.
Our Sponsors END_OF_DOCUMENT_TOKEN_TO_BE_REPLACED