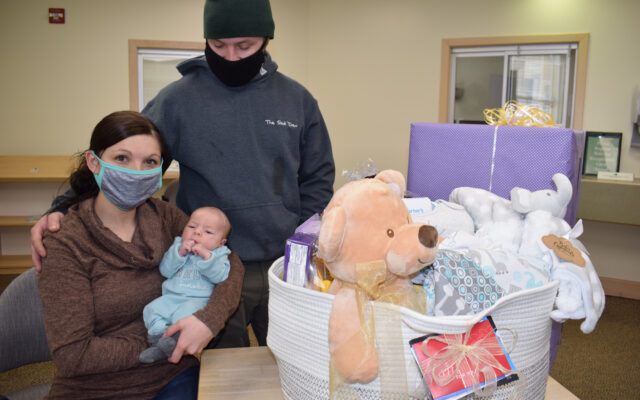 Jace Jules St. Peter arrived at 7:58 a.m. on Jan. 23, 2021, and weighed 5 pounds and 13.9 ounces. After a relatively normal and uncomplicated pregnancy, his mom, Ashlee Jipson, and dad, Jake St. Peter, were overjoyed at Jace’s long-awaited arrival, but that joy was soon interrupted when, less than a half-hour after his birth, they learned that paramedics would be flying their son to Northern Light Health’s Neonatal Intensive Care Unit (NICU) at Eastern Maine Medical Center.

“Dr. Roberts was fantastic,” said Jipson, who works as a registered nurse at Northern Light Home Care and Hospice. “She noticed everything right away and contacted a colleague down there at NICU.”

Within his first three hours, baby Jace was on his way to the airport in Frenchville. Once Jace was on the plane, the ambulance returned to transport his mom, and his dad followed the caravan down to Bangor to join his new family as they faced an unknown situation.

Everything happened so quickly that nobody had time to celebrate or enjoy the usual first moments of bonding, and all of the pomp and circumstance to honor the first baby born at the hospital in the new year would simply have to wait. All thoughts were on what was next – and that remained a rather frightening mystery in those first hours of Jace’s life.

“The words can’t ever describe what we were feeling,” said Jipson. All she could focus on at that moment was that something was wrong and her son was going to be watched for 72 hours and undergo some testing.

“I remember hearing the words, but not being able to actually process it,” said St. Peter about learning his son was being transported.

What started as a 72-hour observation, however, turned into five agonizing weeks before the young family was able to return home to St. Agatha. Jipson feels comforted knowing that her son is in good hands with NMMC’s Dr. Alexandra Roberts, who is monitoring Jace with weekly appointments now that he has come home.

So, when the Jipson/St. Peter family returned to the St. John Valley and came to NMMC Family Practice for a follow-up appointment on March 5, staff at the hospital were finally able to present them with the generously sponsored New Year’s Baby Welcome Basket.

The basket, valued at more than $1,200, was full of baby essentials, gift cards and other useful gifts that local businesses, individuals, and organizations contributed to make the New Year’s baby’s arrival extra special. After their appointment, staff helped the family load all their goodies into their vehicle so their focus could be on getting baby Jace home again, where he is just starting to get accustomed to his new surroundings.

“Overall, he’s doing really well at home,” said Jipson. “We’re getting into our own routine here and it’s working out really well. We’ve had wonderful support from the whole community.”

Family and friends went “above and beyond,” she said, stepping up to help watch their home and their dog while they had to be away for so long. “We have a very good support system, and that helped make the entire situation easier.”

Low pressure south of Nova Scotia and its associated upper-level low pressure area will continue to draw moisture over the area aloft keeping plenty of clouds as well as a chance for some scattered showers through the afternoon.
Our Sponsors END_OF_DOCUMENT_TOKEN_TO_BE_REPLACED