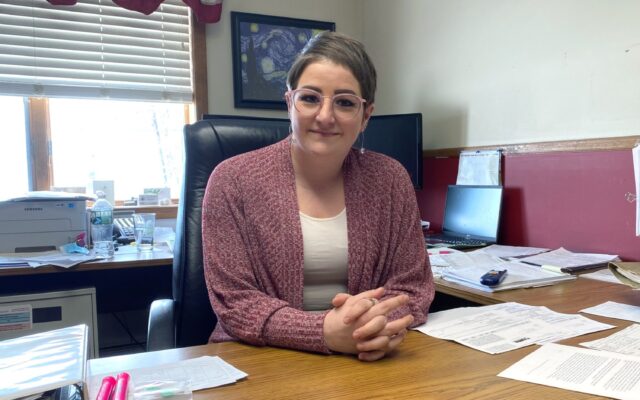 Hannah Catlin • March 15, 2021
St. Agatha’s board of selectmen is looking for a town manager after the March 9 resignation of Aubrie Michaud.

ST. AGATHA, Maine — St. Agatha’s board of selectmen is looking for a town manager after the March 9 resignation of Aubrie Michaud.

Aubrie Michaud has been St. Agatha’s town manager for over three and a half years now, and until recently, she’d always loved the job.

But like it has for many people, the past year has taken a toll on Michaud. From COVID-19 to a divisive electoral season, as national discontent has trickled down to the local level, she’s felt less and less up to tackling the job.

“People are unhappy and they just want somebody to fix it and they don’t know who can fix it, so they’re turning to their local governments, local representatives,” Michaud said. “It’s become harder when you can’t fix what needs fixing and then you have to defend that.”

Michaud said she didn’t reach a breaking point, but just realized that she wasn’t the person for the job. On March 9, she officially resigned. The St. Agatha Board of Selectmen met in an emergency session on March 11 to accept her resignation letter.

“There are some changes that need to happen and I just can’t be the one to bring the town through those changes,” she said.

The pandemic, in particular, changed the dynamic of Michaud’s relationship with the town. While she said St. Agathans were resilient in their businesses and lives, she felt there was a communication breakdown between the townspeople and the town government.

Michaud said her relationship with residents was built on face-to-face, straightforward interactions, especially meetings in her office. When lockdown began, the town offices were closed for several weeks. Even after the offices reopened, fewer people came in person.

“I feel like since that distance occurred things have changed,” Michaud said.

Instead of hearing about issues directly from people, Michaud said she began to see frustrations aired more on social media. She’s even pulled away from using her own personal accounts, citing scrutiny she’s received from constituent commenters.

Between the breakdown of communication and the amplification of frustrations online, Michaud, someone who is open about her ongoing struggles with her mental health, began to see her well-being decline. She described herself as an over-thinker and someone who often sees the worst-case scenarios.

Chair of St. Agatha’s Board of Selectmen David Guerrette said that he has not personally witnessed a significant souring in the town’s relationship with its government, though concurred that further distance between officials and residents was difficult.

“You know with COVID, that takes its toll on regular people,” Guerrette said. “The population does get frustrated but that’s not her fault.”

Michaud has accepted a position at Northern Maine Medical Center. Her last day of work will be April 8.

Meanwhile, St. Agatha is trying to figure out how to fill her shoes. Michaud had a couple of years left on her contract, and the town wasn’t prepared to hire a new town manager. The selectmen are considering making significant changes to the town’s governmental structure after she departs.

One solution, for example, could be to share a town manager with Frenchville, who is also on the hunt for a new one after Ryan E. Pelletier resigned at the end of February to return to his family’s construction company.

“That’s just one thing to look at for cost savings,” Guerrette said.

St. Agatha’s select board will discuss this idea at its March 17 meeting. Frenchville Interim Town Manager Susette Zetterman said the board has not yet heard an official proposal on the issue, though Guerrette did ask to speak about it at an upcoming meeting.

A warm front moved through overnight ushering in higher dew points and humidity levels. Low-level clouds across the Valley will keep temperatures in the lower 70s today for most Valley locations.
Our Sponsors END_OF_DOCUMENT_TOKEN_TO_BE_REPLACED