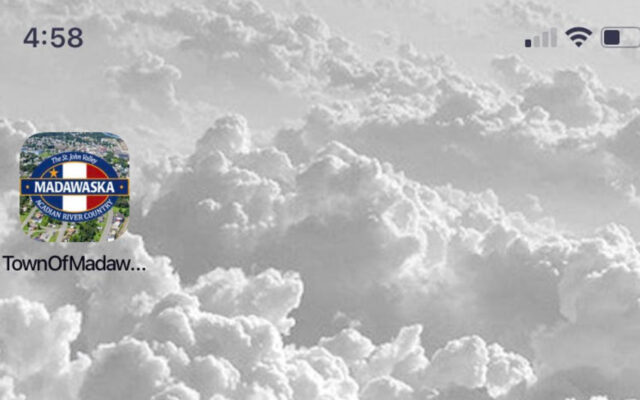 Hannah Catlin • March 6, 2021
The Madawaska Board of Selectmen has officially launched the town’s app -- a completely new way for the town and its residents to communicate. TownOfMadawaska is available for download on both iOS and Android devices.

MADAWASKA, Maine — The Madawaska Board of Selectmen has officially launched the town’s app — a completely new way for the town and its residents to communicate. TownOfMadawaska is available for download on both iOS and Android devices.

It’s a hub for all things Madawaska, with pages for all of the major town offices from public works to police and fire. Users can choose to be notified with up-to-date information on town happenings: emergency alerts, meeting agendas and restaurant specials.

The app also offers Madawaska businesses an opportunity to list their contact info and update with specials. The form for business owners to register their company to be listed is also available on the app.

For the app’s supporters, the project represents a move to put the town at the cutting edge. As far as the board knows, Madawaska is one of, if not the first, town to develop a comprehensive town app.

“From the research we’ve done, there aren’t very many community apps like this,” Selectman Jason Boucher said. “There are some that have basic information, but ours is the first to be departmentalized and have ways to communicate back and forth.”

The app design was inspired in part by Canadian provincial apps, which contain subsections for municipalities that look similar to Madawaska’s app.

The motion to approve the app at the March 2 board meeting passed 4-1, with Selectman Dan Daigle being the sole vote against. His first concern was a legal one. The board’s discussion of the app began in an executive session, and based on personal legal advice he’d sought out, Daigle was concerned that continuing the conversation in open session was a procedural violation.

He also was concerned that the town’s aging residents would not be able to make use of the app, citing his own experience.

“I believe as a selectman that that amount of money could have been far better spent in other areas,” Daigle said. “Myself, I’m 65 years old, I do not use any apps on a phone.”

Town Manager Gary Picard, meanwhile, defended the decision, saying that town officials would still be available through traditional modes of communication — phone calls or a drop by the office — and that agendas and town information would still be advertised as before through local news outlets.

Madawaskans can leave feedback for the app and other town questions and suggestions in this in-app feedback form, pictured here in this March 5 screenshot. (Hannah Catlin | St. John Valley Times)

The town is also planning to create and publish instructional videos on how to best use the app.

That said, Daigle, who has, over the past year, regularly stood in opposition to the rest of the board, said he felt this move represented the continued failure of the board to work on what he feels is the fundamental duty of that group: creating jobs.

“I think that the money spent on this app — I really don’t think that it’s going to increase commercial activity or promote jobs, which is what Madawaska needs,” Daigle said. “I think that as the board of selectmen we have failed the community.”

Supporters, meanwhile, say that the app will streamline the town’s communications — moving away from Facebook, where departments and businesses all have their own separate pages.

“We thought hey if we put the entire town in one spot that provides notifications so you can be out in the boonies ice fishing and your phone will ding and tell you something important is going on in your town,” Boucher said.

For Picard, moving off of Facebook brings other advantages too.

“You’ve probably noticed we have not been using social media a lot like we did in the past, only because it seems to fall off the rails at the start of comment,” Picard said.

He added that posts may start with important town information, “but one day later, 50 comments deep, that thread is about something else not related to that at all.”

“It’s a great vehicle to get information out — social media like Facebook and Instagram — but it does have its consequences,” Picard said. “What this app, we believe, will do for us, is give people an alternative social media.”

The idea first appears in Madawaska’s strategic plan for 2018-2028. Since that plan, conversations about the app had been tentative, Picard said he spent a long time “kicking the tires” and seeking out quotes from various Silicon Valley companies. But the quotes were simply too high, sometimes as high as $30,000 or $40,000.

Ultimately, development kicked into high gear when Selectman Jason Boucher joined the board last November, bringing with him years of tech expertise.

Boucher’s own company, Simple Computers 101, won the bid for the app’s development, working on it for pennies in developers’ spare time. Boucher had to take a step back from the bid selection and financing processes, giving up his voting privileges as a selectman to follow ethical guidelines.

Picard said that several hundred people had already downloaded the app since it launched on Tuesday. While the app is fully functional now, Boucher said it will be a work in progress for a while. For example, he eventually wants to move town payments — registration fees, gym memberships, etc — onto the app.

For now, residents can submit their feedback on the app and their concerns and questions about the town in general, via the Your Voice Matters suggestion box, found at the bottom of the TownOfMadawaska app home page.

The 500-millibar upper-level trough associated with the cold front and low pressure that brought last evening's thunderstorms will slowly move over the Valley today and Thursday with a chance for scattered showers and an isolated thunderstorm or two across the Valley this afternoon.
Our Sponsors END_OF_DOCUMENT_TOKEN_TO_BE_REPLACED