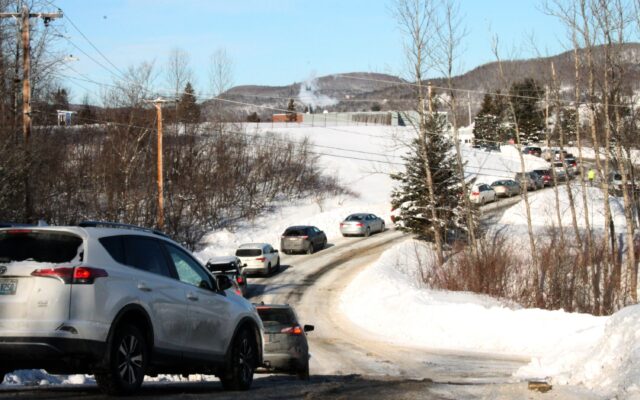 Hannah Catlin • March 3, 2021
It’s a scene Catholic Charities Director of Hunger and Relief Services Dixie Shaw has seen dozens of times now: cars lining up at 6 a.m., law enforcement called in for traffic control, hundreds, even thousands, of people waiting -- some for hours -- for a 30-pound box of free food.

MADAWASKA, Maine — It’s a scene Catholic Charities Director of Hunger and Relief Services Dixie Shaw has seen dozens of times now: cars lining up at 6 a.m., law enforcement called in for traffic control, hundreds, even thousands, of people waiting — some for hours — for a 30-pound box of free food.

But there was still a shade of disbelief in Shaw’s voice as she yelled over the sound of volunteers calling to each other and cars pulling through the distribution line at the Madawaska Multi Purpose Center on March 3, watching it all unfold again.

“You wouldn’t believe it,” she said. 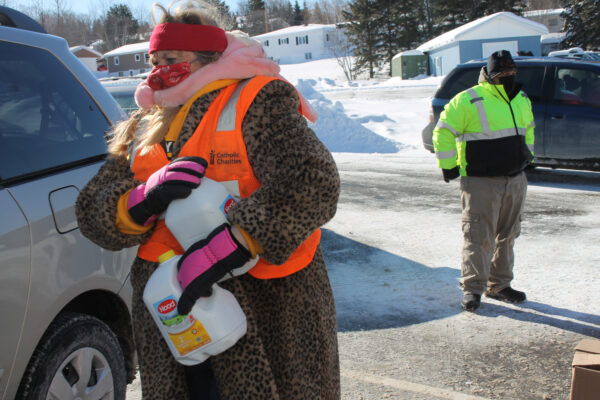 The Catholic Charities distributions are part of the U.S. Department of Agriculture’s Farmers to Families Food Box program — an initiative it announced in April to respond to increased food insecurity during the COVID-19 pandemic.

Without fail, hundreds turn out, pushing distribution times earlier and earlier. Madawaska’s distribution on Wednesday was slated to begin at 9 a.m., but volunteers began unloading the 18-wheeler carrying 1,000 food boxes at 8:30. 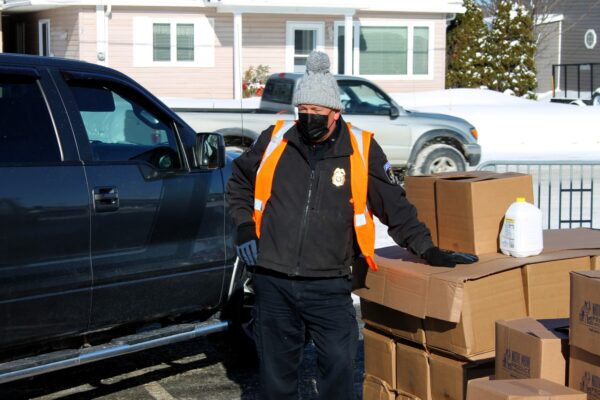 In Madawaska, Shaw was aided by a small group of about a dozen volunteers including Madawaska Police Chief Ross Dubois, Parks and Recreation Directors Sam Cyr and Diane Boucher, Customs and Border Protection officers, a handful of employees from NorState Credit Union and others. 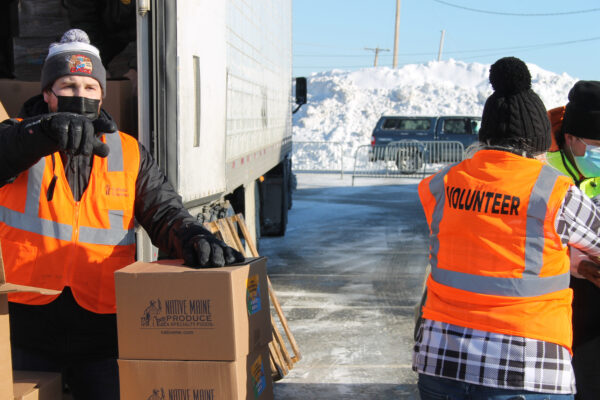 Boucher remarked that when she arrived at the Multi Purpose Center for work just after 6 a.m., there were already people waiting in line. At 7:45, traffic was backed up a quarter mile. By the time the distribution was in full swing, cars had formed several lines feeding up toward the truck, one lining Fifth Avenue and crawling down the side of Main Street, another winding up Third Avenue and out of sight.

Where cars approached the line from the wrong angle, traffic jams broke out as some tried (and mostly failed) to edge their way into the queue at a midpoint. Madawaska police responded to break up some of those situations.

These traffic jams, now common at Catholic Charities giveaways, reflect the high demand for food support in Aroostook County. In 2017, long before the pandemic put millions of Americans out of work, Feeding America estimated that 15.4 percent of people generally, and 21.9 percent of children in The County, were facing food insecurity. 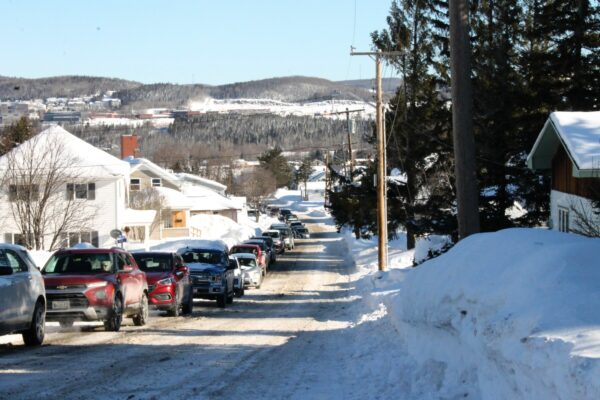 Cars waiting to get to the food distribution drive at the Madawaska Multi Purpose Center on March 3 split off into multiple lines, pictured here stretching down Fifth Avenue and on to Main Street. (Hannah Catlin | St. John Valley Times)

Despite the evident need, Chatholic Charities has struggled to keep up with demand. Shaw said volunteers often run out of food early, and have to turn many who are in need away. It’s never easy.

“I have never had so many God bless yous and go eff yourselves in one day as when we’re handing out food,” Shaw said.

When Catholic Charities first became involved in the program in the summer, Maine had just won $1.35 million in USDA aid. In July and August, Catholic Charities was doing four food distributions in The County per week, Shaw said last month. But throughout the fall, Maine struggled to win funding from the government and had to rely on other states to distribute food north.

Shaw said this reduced distributions to four a month.

Luckily, in January, Native Maine Produce won more than $1.3 million, allowing a more reliable stream of food boxes to Aroostook County. But distributions are still down significantly from what they were in the summer — maybe five or six a month.

“It’s mind-blowing and it’s frustrating to me that we’re not getting more for an area like this,” Shaw said.

For now, she and Catholic Charities are working with what they have.

“I’ll do whatever it takes,” Shaw said.

High pressure moving east will allow southerly flow to set up across the Valley with above normal temperatures across the region. Clouds will increase this morning as a cold front approaches.
Our Sponsors END_OF_DOCUMENT_TOKEN_TO_BE_REPLACED