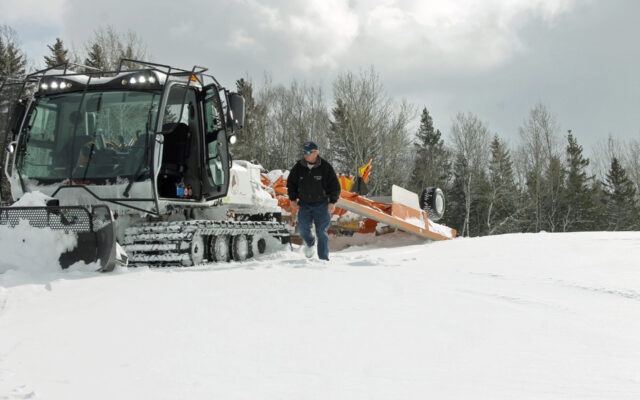 Hannah Catlin • February 18, 2021
On his 75th, George Morneault received more birthday wishes than ever before. Madawaska Snowmobile Club, where Morneault works as the Trail Master, posted an announcement about his special day on Tuesday, Feb. 16, on its Facebook page.

MADAWASKA, Maine — On his 75th, George Morneault received more birthday wishes than ever before.

Madawaska Snowmobile Club, where Morneault works as the Trail Master, posted an announcement about his special day on Tuesday, Feb. 16, on its Facebook page. As the post was shared across snowmobile and Aroostook County community groups, hundreds of people responded with well-wishes.

“I was freaking amazed,” Morneault said.

Morneault has been a pillar of the sledding community for decades. He joined Madawaska Snowmobile Club in 1970, when he got his first sled, and has been part of the organization ever since. In the late 1980s, he even served as the club’s president.

Six years ago, then-retired from the Twin Rivers Paper Co. steam plant where he had worked for more than 40 years, Morneault became the club’s Trail Master. 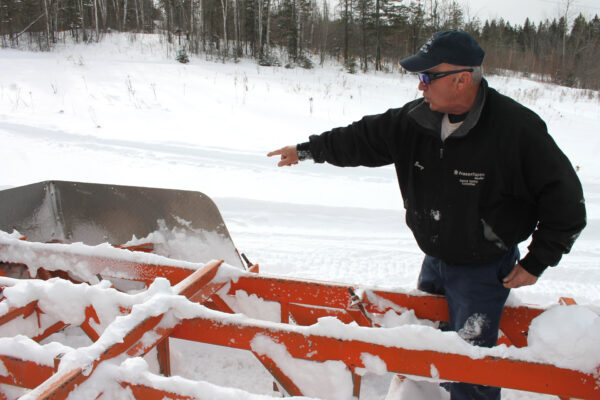 He’s responsible for coordinating the maintenance of the club’s 50-plus miles of trails. It takes six operators nearly all week to keep up with Madawaska’s trails, especially given how popular they are with snowmobilers from across the state and even the country.

Operators work late nights, take long drives through the woods alone and the giant trail-grooming truck they use reaches its top speeds at a blinding four or five miles per hour.

If a storm hits — like the one that billowed through Madawaska on Morneault’s birthday — it will take the operators 18 collective hours to groom the trails.

But Morneault doesn’t mind the work. In fact, that’s where he found himself the day after Tuesday’s storm, packing down roughly 7 inches of fresh powder for sledders to enjoy. When Morneault drives, he relaxes, casually guiding the behemoth trail groomer over steep hills and thickly wooded paths.

Passing snowmobilers wave at Morneault and he responds in kind. When an unfortunate sled pulled too far off the trail to let the trail groomer pass, Morneault offered to use the truck to help pull it out. Luckily the snowmobilers were able to wriggle it out on their own.

It may make the trails a little hairy before grooming, but the extra snow is good news for the club. It’s been a busy year, despite the restrictions caused by the COVID-19 pandemic. Morneault speculated that on a weekend, he sees about three times more sleds on the trail than he does cars on the road.

Unfortunately, even with high rider traffic, it’s been a tight year for the club, a non-profit that relies on donations for equipment purchase and maintenance. The club gets grants from the state and support from the Maine Snowmobile Association, but hasn’t been able to host any of its usual fundraisers, which help bring in money from riders.

The club’s first opportunity in nearly a year is scheduled for 10:30 a.m. on Saturday, Feb. 20, at the Cyr’s Cove Trail Crossing. At the trailside fundraiser, club members will sell 50/50 raffle tickets — an annual promotion Morneault said usually brings in several thousand dollars.

Every penny is important when essential machinery runs so expensive — the 2019 Prinoth Groomer the club uses is worth well more than $200,000. Even though it’s only a couple of years old, it’s never a bad time to start saving for the next major purchase.

Morneault loves the machine. It has cruise control, speakers and a truly spaceship-worthy panel of buttons and monitors. Plus, with a heated cabin, he’s comfortable riding in just a light jacket, even as wind whips up mini-snow devils outside.

Morneault has been operating groomers for years. He learned from a good friend, late Trail Master Phil Hebert, who had done the job for 27 years before he died in 2009. The two groomed these trails together many times, and Morneault still holds onto those memories.

Once, when Morneault got the groomer stuck off-trail in the middle of a late-night session, it was Hebert’s voice he heard egging him on.

“That night I swear I heard him laugh and say, ‘George, take out your shovel’,” Morneault said.

It took him two and a half hours to free the groomer and he got home at 4 a.m.

Club President Ken Theriault loves having passionate, dedicated people like Morneault on the team. It keeps the club running even in difficult years like this one.

Morneault agreed to that assessment with his signature, booming laugh. 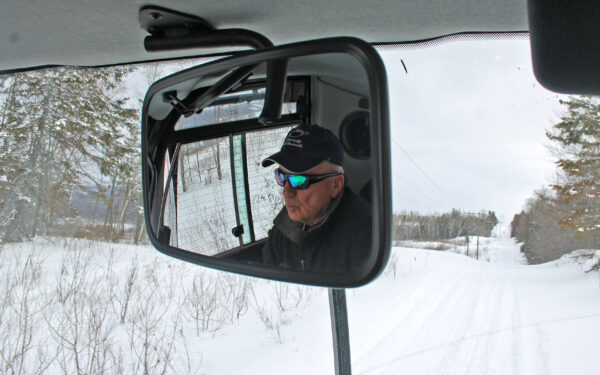 When he’s not grooming, Morneault still rides these trails with a group of friends, many of whom are also part of the club. Last weekend, they got 10 or 12 guys together and rode south to Caribou.

Morneault also rides with his two adult sons, his daughters-in-law and his three grandchildren. Sledding has always been a family affair for Morneault. He taught his sons how to ride when they were young, and at one point owned a snowmobile for everyone in the family, including his wife Lorraine.

While Morneault is originally from St. Agatha, Lorraine was a Madawaska native. The two met at a dance hall a few years after Morneault left the U.S. Army, where he worked state-side operating heavy machinery.

The two were married for more than 50 years. They worked together at Twin Rivers Paper Co.. They played cards together every evening — cribbage was their favorite. And of course, they went snowmobiling together.

Lorraine Morneault died two months ago on Dec. 9, 2020, after suffering multiple heart attacks. Morneault and their sons were able to see her while she was in the hospital, and George was by her side until the very end.

It’s been difficult for George Morneault since she passed. But working at the club and seeing his friends there helps him cope.

When the trail groomer rolls past couples sledding together, Morneault points them out. He likes to see them riding in tandem.

This may be one of Morneault’s last seasons as Trail Master. Although he’s still active — hitting the gym four times a week — Morneault is considering what will come next. He might even winter in Florida next year, where some of his family lives.

For now, it’s the community and the love of the sport that keep him coming back.

As good as it feels to get hundreds of birthday wishes from the community, “I don’t do it to get that,” Morneault said. “I do it because I enjoy it.”