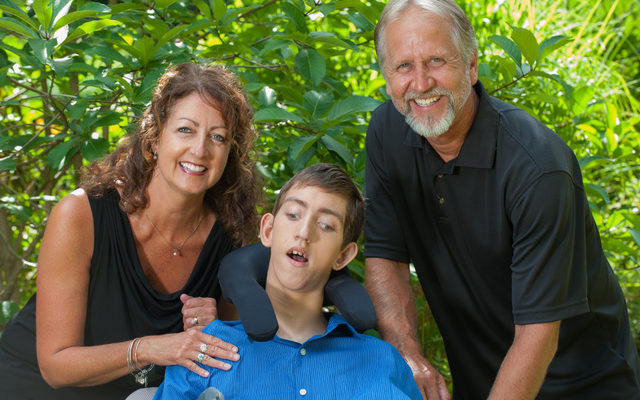 Jessica Potila, SJVT / FhF Staff Writer • February 15, 2021
A Madawaska native who founded a non-profit organization to help families purchase supplies to improve the lives of children with developmental disabilities was named 2021 Maine Mother of the Year.

MADAWASKA, Maine — A Madawaska native who founded a non-profit organization to help families purchase supplies to improve the lives of children with developmental disabilities was named 2021 Maine Mother of the Year.

Robbie Foundation helps families with children who have developmental disabilities by funding adaptive equipment, assistive technology and therapy not covered by insurance.

A middle school educator, Lynn Gierie was inspired to form Robbie Foundation in 2010 after networking with other parents of children living with disabilities.

“I came to realize there was really a need to bring awareness to this population and do something that made a difference in their lives,” she said. “Coming from northern Maine I’ve never been shy about working hard toward something and I felt all it took was hard work, advocating and coming together with a group of people to provide for these kids.”

The non-profit is Maine-focused and operated completely by volunteers, so 100 percent of funds serve the children by purchasing things such as safety beds, iPADS with software applications that allow non-verbal children to communicate, and all-terrain wheelchairs.

“We just don’t want kids to be limited and confined,” Lynn Gierie said. “We’re really all about optimizing a child’s growth and development and give them the same opportunities as a typical child; that’s really, really important to us.”

“So far Robbie Foundation has been able to make a significant difference in the lives of these kids,” Gierie added. “We still have a lot to do and a ways to go, but I think we’re making some headway.”

“Lynn will be a great representative for Maine and our chapter plans to honor her and the 2020 Maine Mother of the Year, Adrian Phair of Oakland, along with all Merit Mothers, from both years, at a special luncheon this May,” President of the Maine Chapter of American Mothers, Inc., Lina Michaud said.

A cold front moves through today with scattered showers that will taper off this evening as high pressure builds into the region with partly cloudy skies.
Crown Politics END_OF_DOCUMENT_TOKEN_TO_BE_REPLACED

All five candidates running for two seats on the Fort Kent Town Council gathered at a live question and answer forum.
Our Sponsors END_OF_DOCUMENT_TOKEN_TO_BE_REPLACED