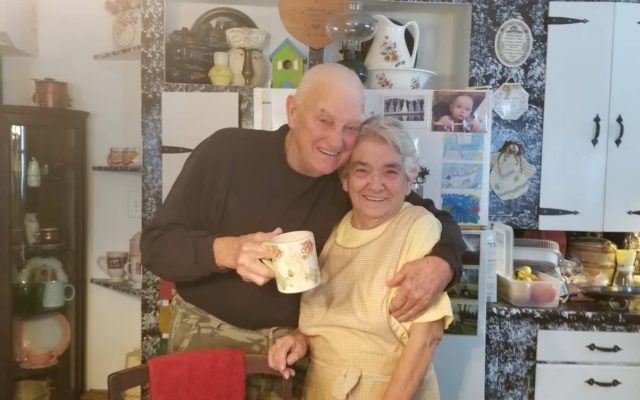 Jessica Potila, SJVT / FhF Staff Writer • February 11, 2021
For Tylor and Leitha Kelly of Allagash every day might be Valentine’s Day.

ALLAGASH, Maine — For Tylor and Leitha Kelly of Allagash every day might be Valentine’s Day.

The parents of five children, 12 grandchildren and 10 great-grandchildren, remain inseparable after 62 years of marriage.

Leitha, 82, and Tylor, 84, both grew up in the small town of Allagash, but first began dating in their late teens when they noticed one another at a boat race at the Long Lake Sporting Club in St. Agatha.

“Not long after our mom and dad started dating, dad made mom a ring out of a 1958 quarter,” daughter Lisa Kelly-Powell said. “He shaped the ring perfectly with the date 1958 on the inside of the band, and when he gave mom that ring he said, ‘Where I go, you go and where you go, I go.’”

What would not be a marriage of financial riches was blessed beyond measure in every other way.

“Their love of children, the outdoors, hunting, fishing, gardening, cooking and canning held them together,” daughter Darlene Kelly Dumond said. “They did everything together from running their businesses to changing diapers.” 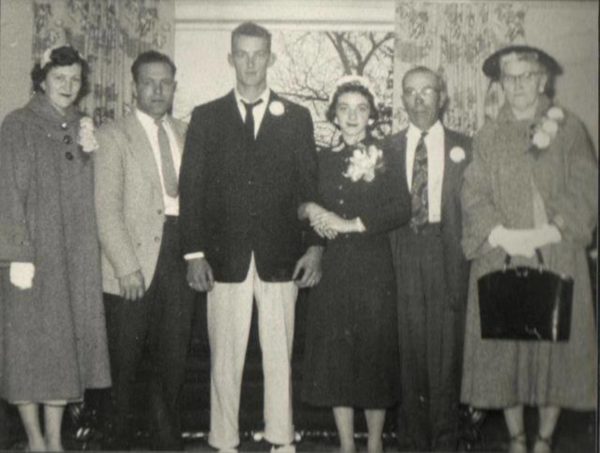 Tylor (third from left) and Leitha (right of Tyler) Kelly with their wedding party on the day they were married 62 years ago. (Courtesy of Darlene Kelly Dumond)

Tylor, a Maine guide, worked as a logger until he was injured in a serious logging accident. The couple opened their own restaurant in Allagash — Two Rivers Lunch —  more than 40 years ago as a food stand.

“Dad had guided a fisherman for the week and he gave him $400 and that week Mom made her first order of supplies,” Kelly Dumond said. “They continued to build on to the little to-go building they had until they have a full restaurant today.”

“He was a Republican Baptist and I was a Catholic Democrat but we agreed to never argue about religion or politics,” Leitha Kelly said. “We believed firmly in one God and our faith would bring us through anything that we would encounter.”

Leitha also believes in her husband.

“Once Tylor made up his mind, I trusted it,” Leitha said.

The Kellys share a love for children and were both very involved as parents. Leitha would chaperone sporting events armed with a load of baked goods. Tylor would often drive his logging truck out of the woods to attend games, only to head back to work again that same evening.

The younger generations of Kellys respect and admire their grandparents.

“I would describe my grandparents’ relationship as something you just don’t see too often these days — a true team, best friends, and the most loving couple not just to each other but to everyone that has entered their lives,” granddaughter Erin Belle Kelly said. “Truly they are the best representation of love that I have ever seen. “

Grandson Devin Powell said it is the simple things about his grandparents that make them special.

“I think what I like most about my grandparents is simply the fact that every night you could see them together at the dinner table,” Powell said. “I never saw them fight once in my life.”

Hailey Belle Kelly said her great-grandparents will “forever be my role models.”

“Ever since I was younger, I looked up to their type of love and strive to achieve their happiness together someday,” she said. “I will forever be grateful to have grown up seeing this pure form of love.”

COVID-19 has brought the couple even closer because they have been sheltering in place together for a year. They even built the summer kitchen Leitha has always wanted.

The Kellys plan to keep the promise they made to each other the day Tylor proposed with his homemade ring — “Where I go, you go and where you go, I go.”

“I remember one summer day sitting with mom and dad drinking tea at their kitchen table when dad said, ‘When my time comes I want my ashes spread in the Little Black River,” Lisa Kelly-Powell said. “Mom looked at him and said, ‘And I want to be next to you, but because I’ve always been afraid of water plant me on the bank where the wild flowers grow.’”

As election season winds down to its final stretch, candidates are raising money to fund their campaigns, hoping to prevail in the Nov. 3 election, which has already seen millions of Americans cast their ballots in early and absentee balloting.
Apex Weather END_OF_DOCUMENT_TOKEN_TO_BE_REPLACED

Clouds are expected to increase this afternoon as a weak upper trough over the Saint Lawrence drifts southwards producing a chance for afternoon snow showers across the region.
Our Sponsors END_OF_DOCUMENT_TOKEN_TO_BE_REPLACED