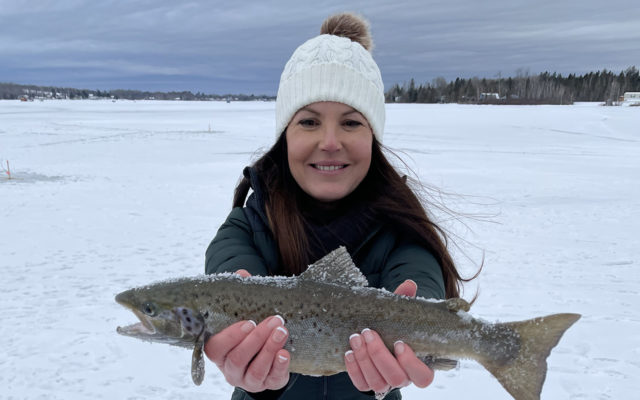 Ice fishing underway on some lakes

Bill Graves, Special to the Fiddlehead Focus • January 29, 2021
I really didn’t think 2020 could get any crazier, then I woke up Christmas morning to green grass in the yard, bare fields next door and dry, clear roads. That is a rare occurrence in Aroostook County, and the strange weather just keeps on occurring, with far warmer than normal daytime temperatures and very limited snow.

I really didn’t think 2020 could get any crazier, then I woke up Christmas morning to green grass in the yard, bare fields next door and dry, clear roads. That is a rare occurrence in Aroostook County, and the strange weather just keeps on occurring, with far warmer than normal daytime temperatures and very limited snow.

By mid-January there were only about 6 inches of snow accumulated, no tall snowbanks along the roads or beside house driveways.

To the chagrin of ice fishermen, the mild temperatures have interfered with ice freezing on many lakes and led to questionable fishing conditions. Especially on larger waterways, safety is essential, as snowmobiles and vehicles have already gone through the thin ice at several locations. Some lakes and ponds are fishable, but be sure to check ice thickness with a ice chisel or an auger before venturing too far. While coves and shallow shorelines may support fishermen and even smelt shanties, deep water areas, inlets, outlets and areas with a current are still suspect. 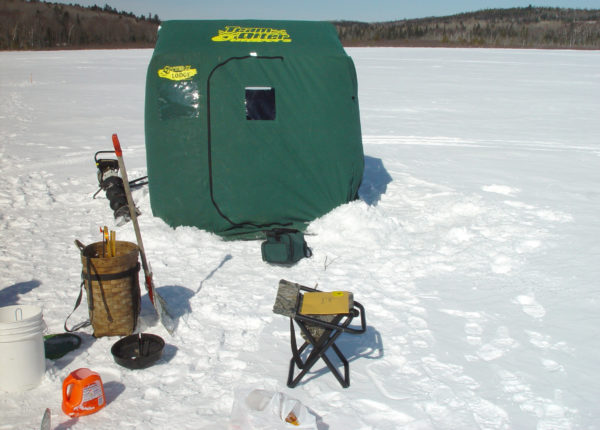 Winter anglers planning to make a day long outing and wanting to set tip ups and jig for smelt can assure comfort by dragging along a portable fishing shanty for heat and cover from the wind. (Courtesy of Bill Graves)

With care and caution in mind and regional hard water anglers anxious to get out of the house for socially distant fishing, a few lakes are in play. Friends and relatives from the St. John Valley tell me that while the ice depth on the main portion of Long Lake is questionable, Sinclair Cove and the narrow segment near St. Agatha are safe and producing action.  In fact, a surprising number of fish huts are already in place and handlining for smelt has been excellent at certain times. I know of one pair of sports that met at 4:30 a.m. to begin jigging cut bait, and in just over an hour had filled their daily two quart limit.

The tip-up action has been steady as well in the cove areas of Long Lake with many salmon caught, most in the 2- to 3-pound size. I did see some pictures posted on Facebook of at least two very large silver slabs that were in the 6- to 8-pound class, but of course there was no reference to where on the lake where they were caught.  Weekday outings to this popular, easy-to- access lake are certainly less crowded, but when safe ice depths shroud the entire lake there will be lots of room.

If brook trout are your species of choice and you live within 30 minutes of Presque Isle, Arnold Brook Lake is the place to visit. Well stocked each year, simple to reach over well plowed roads with plenty of parking right on the shoreline, it’s a great spot to introduce youngsters and rookie adults to winter fishing. There’s a two fish daily limit and local sportsmen often visit before work or during lunch hour to drill a couple of holes, set traps, and sit in their warm vehicle to eat a sandwich and watch for a flag. Sixteen- to 18-inch brookies are not uncommon catches this month from this shallow, man-made reservoir.

Ice drillers near Houlton might want to check out Drew’s Lake, also called Meduxnekeag Lake. The large portion may not be frozen thick enough, but the small end hear the boat ramp and outlet should be fishable. The road and parking area are plowed and it’s a short walk to auger fishing holes with no need for a snowmobile. Drew’s offers several species of fish, but most attractive to many sportsmen is the opportunity to catch a bragging size brown trout, a rare opportunity in Aroostook. Even when the trout and salmon fishing lags a bit, large pickerel, yellow perch and tasty white perch will keep tip-up flags flying.

Birch Point Cove at Pleasant Lake in Island Falls is another spot which often boasts a safe layer ice early in the season, while the large portion of the lake is still questionable. Before traveling, anglers might want to make a quick call to the Birch Point Lodge to confirm safe ice conditions and save a wasted trip. While trout and salmon fishing is dependable, just as many anglers visit to jig for smelt. These tasty silver slivers seem to feed in daily cycles, particularly at dawn and dusk, when the action can be so fast sometimes it’s difficult to tend two lines.  There are a good number of cusk in the lake as well and while this fish is ugly in appearance its firm, white meat makes delicious chowder.

If you really want to avoid the more crowded, easy-to-reach waterways, I’d suggest a drive to Rowe Lake in the North Maine Woods.  Head to Ashland’s Six-Mile Checkpoint and take the Pinkham Road to the Jack Mountain Road, and then you will need a snowmobile to take the trail from the road into the lake. Brook trout average 12 to 14 inches and splake are usually 14 to 16 inches, but some older fish weigh in the 2-pound range. It’s a time-consuming drive over rough winter roads but the reward is lots more fish than fishermen.

Every day and night in the 20-degree range will add ice thickness and increase safe fishing options, but don’t assume anything; test ice depth several times in various locations on your chosen lake. Ice fishing is a safe, satisfying way to get outside and still social distance, just don’t take chances. Swimming is not a recommended winter sport in Aroostook County.

A broad area of low pressure crossing the state will bring widespread rainfall to the entire SJV today and tonight. Rain tapers to showers Thursday morning with showers lingering into the evening hours as the low lifts to the northeast.
Our Sponsors END_OF_DOCUMENT_TOKEN_TO_BE_REPLACED