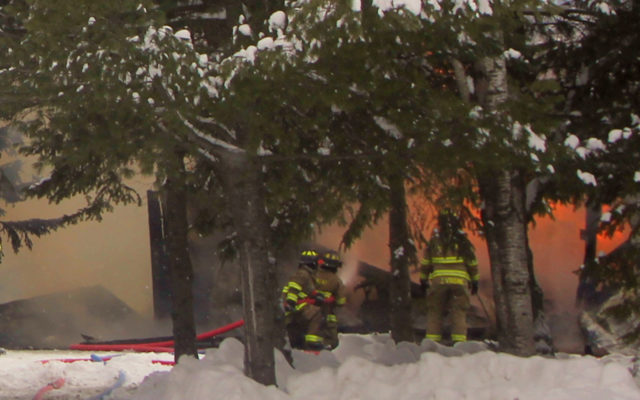 Jessica Potila, SJVT / FhF Staff Writer • January 23, 2021
A garage housing a tractor trailer truck is a total loss but no nearby structures were damaged following a Saturday afternoon fire in Fort Kent.

FORT KENT, Maine — A garage housing a tractor trailer truck is a total loss but no nearby structures were damaged following a Saturday afternoon fire in Fort Kent.

Fort Kent Fire Department received the call a few minutes before 1 p.m. and

The firefighters were able to contain the fire to the garage, although the truck, which was not attached to the trailer, as well as tools and equipment in the garage, were also destroyed by the fire.

No firefighters or others were injured as a result of the fire.

Endee said he will continue to investigate the cause of the fire, which he said appears to be accidental and not suspicious in nature.

“Nobody was there when the fire started,” Endee said.

Ambulance Service Inc. was on standby at the scene as is protocol during structure fires.

Firefighters cleared the scene at 3:41 p.m.

As election season winds down to its final stretch, candidates are raising money to fund their campaigns, hoping to prevail in the Nov. 3 election, which has already seen millions of Americans cast their ballots in early and absentee balloting.
Apex Weather END_OF_DOCUMENT_TOKEN_TO_BE_REPLACED

Low pressure that produced yesterday's Nor'easter will continue to move away from the region in the Maritimes. A large upper-level low associated with the system will move east across the region today.
Our Sponsors END_OF_DOCUMENT_TOKEN_TO_BE_REPLACED