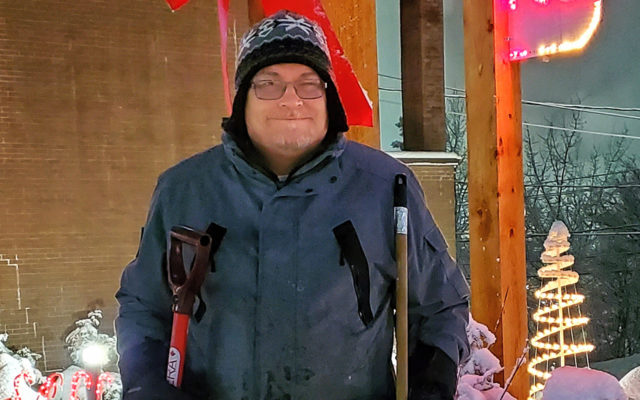 Main Street Samaritan shovels snow for others in Madawaska

Jessica Potila, SJVT / FhF Staff Writer • January 22, 2021
A Madawaska man has been quietly shoveling the steps and walkways of Main Street businesses in the town for years and free of charge, just to make life a little easier for other people.

MADAWASKA, Maine — A Madawaska man has been quietly shoveling the steps and walkways of Main Street businesses in the town for years and free of charge, just to make life a little easier for other people.

Dan Thibodeau, 54, said he has been performing the good deeds since 2005.

“It’s good exercise; it doesn’t take me long,” he said.

Among the businesses Thibodeau shovels is The Bakery on Main, owner Lori-Ann Bouchard said.

“He’s very sweet and always wanting to do nice things for the people who work and live on Main Street,” Bouchard said. “He shovels quite a few places and also cleans off cars for some secretly. He shovels snow early in the morning when he thinks I don’t see and then will buy treats for the others working in some of the offices.”

“He will not take payment and I can usually only manage to get him to come in for a hot chocolate to warm up,” Bouchard said.

Thibodeau has a simple and logical explanation as to why he helps out Bouchard.

“I’m not gonna have the lady at the bakery shovel snow; she cooks enough,” he said.

Thibodeau begins shoveling the businesses at around 5 or 6 a.m. on days after it snows.

“They’re gonna come to work and their steps are already shoveled. If I can leave a smile on someone’s face I will do it,” he said.

Thibodeau helps out on Main Street so often that he had to replace his shovel already this season. 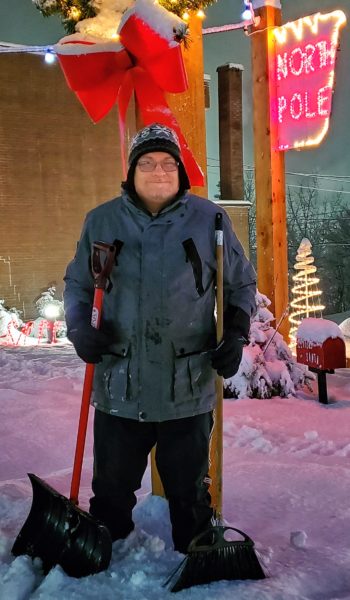 Dan Thibodeau of Madawaska volunteers his time to clear snow from stairs and walkways at some Main Street businesses. (Courtesy of C Meshow Photo)

“I broke one this winter and had to get another one,” he said.

Photographer Chris Michaud of C Meshow Photo happened upon Thibodeau while he was with broom and shovel doing his good deeds on Wednesday.

“It was just by chance we met,” Michaud said. “I was there to photograph the new town park and he was cleaning up Daigle’s Furniture Store front.”

The photographer and the Samaritan chatted for about 15-20 minutes on the sidewalk.

“He told me about how he goes around helping people with their snow and sometimes cooks meals and shares it with friends and people he knows,” Michaud said. “North Pole warms up some when you have good souls like him walking its streets.”

Soon after, Michaud posted a photo on social media of Thibodeau standing with his broom and shovel on the Main Street sidewalk.

“I don’t have a computer,” Thibodeau said. “I’m still in the ice age; that’s what I tell people so when this all came out on Facebook this morning my sister called me up and said ‘Dan, you’re famous.’”

Thibodeau said he does not help others for the recognition, though.

“If I see somebody struggling I’m gonna help somebody,” he said. “I’m not gonna have anybody struggle.”

Mostly cloudy skies are expected across Fort Kent today. Clouds will thicken this afternoon as an area of low pressure quickly moves east from the Great Lakes and crosses Maine tonight then heads into the Maritimes Thursday morning.
Our Sponsors END_OF_DOCUMENT_TOKEN_TO_BE_REPLACED