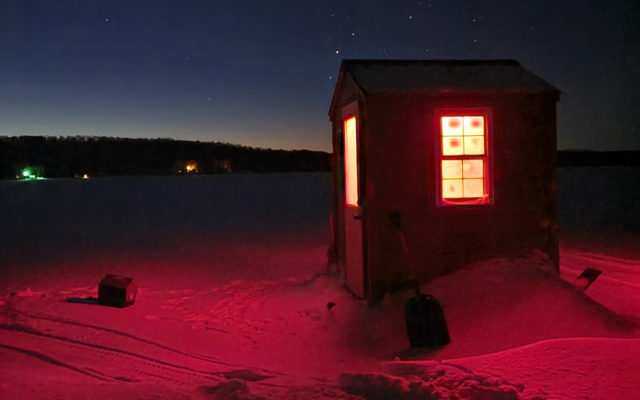 Bernier anticipates another successful turnout this year for the fundraiser, which benefits the Edgar J. Pelletier Cancer Fund.

“There’s an awful lot of interest; people are calling and things like that and we have received a lot of registrations, but we really won’t know until the end of next week,” Bernier said. “Typically, people wait until two or three days before the derby to register.”

Bernier said cold weather as of late during an otherwise mild winter in the area has thickened ice on Long Lake at least, ahead of the derby.

“Oh, just last night we’ve probably gained an inch and a half, two inches in some places, and we have very good conditions right now in terms of making ice,” Bernier said on Thursday. “I’m certain the rest of this week we’re gonna be making more ice. At the same time, we keep telling people, even though you might think it’s safe, proceed with caution. I’m not going to tell anybody to get on the ice with a pickup right now; they need to be careful.”

As of Thursday, Jan. 21, a seven-day forecast report on the website of the National Weather Service office in Caribou calls for below freezing temperatures leading up to the Jan. 30-31 weekend tournament.

Connor Lapierre of Van Buren, who has entered the derby for the past 10 years, plans to participate again this year.

“It’s a great time to get family and friends together on the ice for the weekend,” Lapierre said. “With winter being so long, it’s a great event that a lot of people in The County look forward to. It’s neat because the often quiet lake turns into its own little community over the weekend. There’s often hundreds of people on the lake.”

It will be a family affair for Lapierre, 27, who will be joined by his wife Erika and the couple’s two young boys as they fish from his ice shack located near Lapierre’s brother’s camp at Van Buren Cove on Long Lake.

Lapierre’s brother and his three children will also join in the family ice fishing fun.

“We often fish for salmon and trout,” Lapierre said.

The group also catches plenty of perch, which may not be derby contenders, but prove their worth nonetheless.

“We don’t eat the perch but it’s an easy fish for the kids to catch,” Lapierre said. “I find for the kids it doesn’t matter what they catch; it’s just as exciting for them to catch a small perch or a big salmon. It’s an easy way to get young kids into ice fishing.”

Fishing derby organizers are following COVID-19 regulations in order to keep participants safe, including the cancellation of the opening ceremony. The annual awards ceremony, rather than taking place in person, will be broadcast live the Monday after the derby on the St. John Valley Live Facebook page.

Bernier added that COVID safety protocols will be in place at derby headquarters at Long Lake Sporting Club.

To register for the Long Lake Ice Fishing Derby or for information about this year’s tournament, call Paul Bernier at 207-227-5252 or visit longlakeicefishingderby.com. 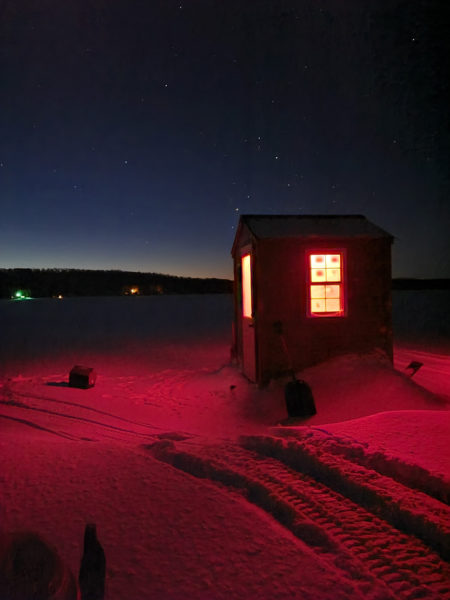 Connor Lapierre captured this image of his ice shanty in Van Buren Cove on Long Lake during the pre-dawn hours of Tuesday, Jan. 19. (Courtesy of Connor Lapierre)

Deep low pressure near Newfoundland will keep breezy conditions across the SJV today and tonight as it interacts with high pressure building down from the northwest.
Our Sponsors END_OF_DOCUMENT_TOKEN_TO_BE_REPLACED