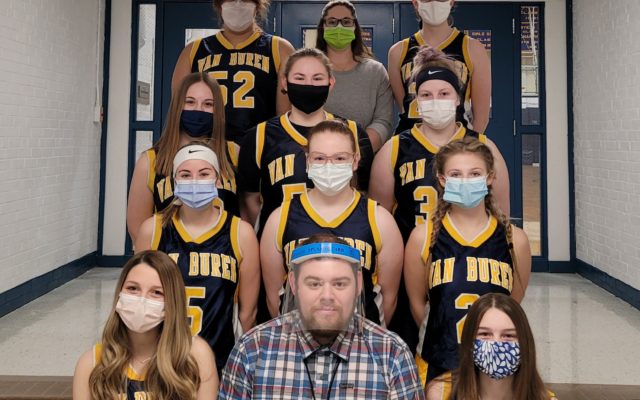 Chris Bouchard • January 20, 2021
The Van Buren Crusader girls basketball team wasn’t able to meet in-person until Jan. 4 of this year, several weeks later than the normal time, due to the COVID-19 pandemic. And while the short season will look much different, with fans not able to attend games and masks required during play, coach Griffin Clifford said the girls are just excited to have a chance to play.

VAN BUREN, Maine — The Van Buren Crusader girls basketball team wasn’t able to meet in-person until Jan. 4 of this year, several weeks later than the normal time, due to the COVID-19 pandemic. And while the short season will look much different, with fans not able to attend games and masks required during play, coach Griffin Clifford said the girls are just excited to have a chance to play.

“Up until [Jan. 4] when we got the team on the floor for practice, it’s been hard,” said Clifford. “A lot of our team building activities are done over Zoom, since we can’t have pot luck dinners or group activities in person.”

One of those activities included the online multiplayer game “Among Us,” which Clifford said is played while communicating in a Zoom chat room with coaches and family.

“We talk over Zoom. We get to be kinda goofy, and it just gives everyone a chance to talk, connect, and have some kind of normalcy.”

Now, with the short season able to begin, Clifford said the team is thrilled to have a chance to get on the floor.

“My seniors were pretty scared,” he said. “They’ve been praying for a season for months. I don’t think it impacted the underclassmen quite as much. They’ve still got some time, but my seniors were really praying for a chance to go out, and go out fighting.”

After graduation last year, Clifford said the team lost three great leaders: Bailey LaPlante, Amanda Nicknair, and Sierra Soucy. LaPlante moved onto play volleyball at UMPI, and was the team’s DJ for their pregame party. Nicknair, he said, was a major loss to the program, and that she had the “biggest smile in the room and an unwavering work ethic,” adding that she graduated valedictorian and is now studying at Husson.

The coach said Susi was the team’s captain, or “fearless leader.”

“She brought the attitude and grit when we needed it,” said Clifford.

And moving into the upcoming season, the coach said the team will need to work on their grit and toughness.

“We got toward the end of the season and we were able to take care of the ball a little better, but we were never on the attack,” he said.

Clifford said the team has a good amount of athleticism and depth, adding that his decision for starters will be “fairly fluid.”

“The best five I can put on the floor is the five I’ll go with that day,” he said, “and we’ll reassess each game.”

Last season, the team went 1 and 17 and did not make the playoffs. The coach said this year he’s picked up five new players, some of which are athletes in other sports. Overall, he said he’s optimistic about the upcoming season, as it will be his second year as the girls varsity coach.

“I think we have a little more of an identity about us and a little more grit. I think we’ll be able to compete and hold our own a little better than last year,” he said

Mostly cloudy skies are expected across Fort Kent today. Clouds will thicken this afternoon as an area of low pressure quickly moves east from the Great Lakes and crosses Maine tonight then heads into the Maritimes Thursday morning.
Our Sponsors END_OF_DOCUMENT_TOKEN_TO_BE_REPLACED