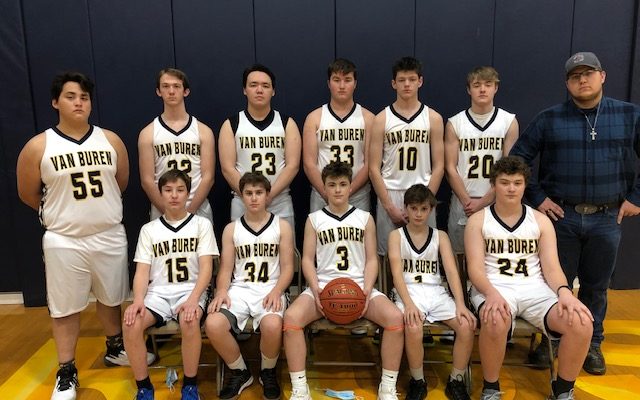 Chris Bouchard • January 20, 2021
Van Buren boys varsity basketball coach Steve Lapierre has 42 years of experience coaching basketball, 38 of which were varsity, in addition to about 40 years coaching boys varsity soccer, but this year’s season is providing the veteran coach and his team with all new challenges.

VAN BUREN, Maine — Van Buren boys varsity basketball coach Steve Lapierre has 42 years of experience coaching basketball, 38 of which were varsity, in addition to about 40 years coaching boys varsity soccer, but this year’s season is providing the veteran coach and his team with all new challenges.

The COVID-19 pandemic resulted in all teams getting a late start this year, shortening the season overall. Fans aren’t able to attend games, and players are required to wear masks.

He said the mask requirement is a tough adjustment for players, but that the lack of fans is among the biggest setbacks.

“It was always an advantage for any home team to be playing with fans,” he said. “I think that’s one of the biggest things for fans and players.”

Overall, he said preparing for the upcoming season has been a significant challenge. In the first week of January, the team participated in competitive drills in preparation for upcoming games.

“Everyone is pretty much in the same boat,” he said. “We’re just happy to have a season.”

He said the opportunity is especially meaningful for seniors.

“I’m just happy for them, and that they’re able to have a season and that they can get out there and play, because there’s not going to be another opportunity for them.”

The Van Buren Crusaders wrapped up their 2020 season at 15-3 and lost in a quarterfinal game against Easton.

The first game of the season is set for Jan. 13 at 6 p.m. against Easton at 6 p.m., with the 12th and final game set for Feb. 24 against Washburn at 6 p.m., according to a schedule provided by Lapierre.

As they move into the new season, Lapierre said the team is down three starters from last year and that there will be a learning curve for the team to figure out a new strategy in the coming games.

“There will be a few games where we’re trying to piece things together,” he said. “It’s a shortened season, which makes it a little more difficult. So you’ve got to be able to put things on the fast track to get everything going.”

One of last year’s starters graduated, and the other two did not join the team. Lapierre declined to comment on the specific players.

Looking ahead, he said there are several student athletes on the team that have good potential as a starter.

“We’ve got seven kids that could be in a rotation pretty regularly,” he said, “and I’m not sure who that’s going to be just yet.”

He said it looks as though they’re going to be up against some fierce competition throughout the brief season.

“Pretty much everyone on our schedule is going to be tough,” he said. “We’re going to have to play well to compete.”

When all is said and done, Lapierre is mostly grateful that the team has an opportunity to get on the floor this year, however brief it may be.

“Any playing that we’re getting in is great,” he said. “Some of these kids have been playing for most of their school years, so it’s great to get them out on the court. We appreciate all the work that people behind the scenes have done to give us this opportunity.”