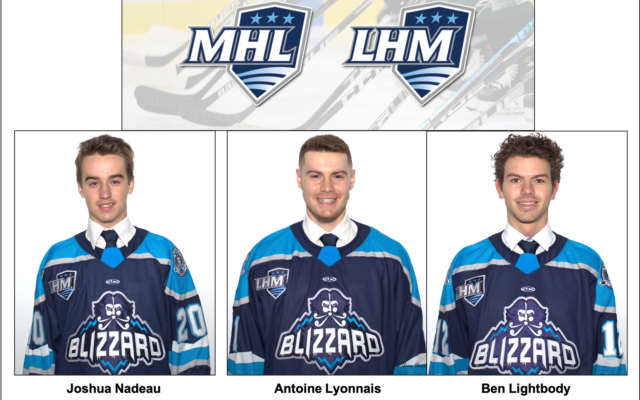 Nadeau, Lyonnais and Lightbody among the stars of the week

Contributed • January 6, 2021
Forward Joshua Nadeau, goaltender Antoine Lyonnais and defenseman Ben Lightbody, all from the Edmundston Blizzard, were named among the MHL players of the week for the period from Dec. 28, 2020, to Jan. 3, 2021.

TRURO, Nova Scotia — Forward Joshua Nadeau, goaltender Antoine Lyonnais and defenseman Ben Lightbody, all from the Edmundston Blizzard, were named among the MHL players of the week for the period from Dec. 28, 2020, to Jan. 3, 2021.

The selection of three Blizzard players is not a big surprise as Edmundston is the only team to have played in all three games scheduled during this period. The Blizzard played against the Grand Falls Rapids twice and the Fredericton Red Wings once. There were no games during the past week for Eastlink South teams.

In three games, Nadeau accumulated 7 points (2g, 5a). He regained possession of the league’s scoring race with 28 points (11g, 17a), tied with Rapids’ Tyler Boivin (10g, 18a). Nadeau, however, has played two games less than Boivin.

Ben Lightbody had three assists last week. With 11 points (1g, 10a), he shares the league’s third position among points by a defenseman.

As for Antoine Lyonnais, he helped the Blizzard get a 4-3 win against Fredericton on December 29. The next day, against Grand Falls, he was in front of the net when his team lost 4-3 in a shootout. He maintained a 2.88 goals against average in two games and a .922 saves percentage. In 7 games this season, Antoine Lyonnais is sixth among the top goaltenders in the league with a 2.80 goals-against average and fourth for save percentage (.913).