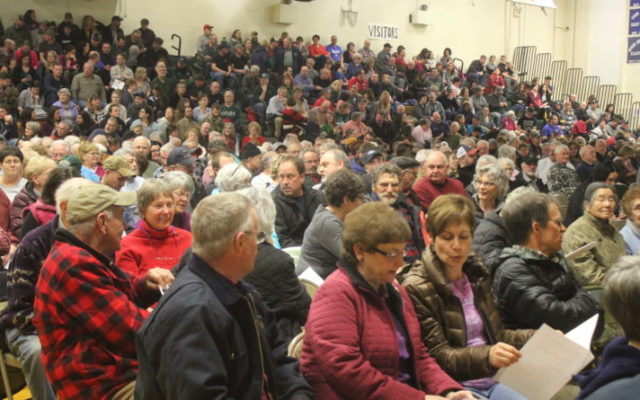 FORT KENT, Maine — Two of the three school administrative units comprising Valley Unified Education Service Center have sent letters to the Maine Department of Education requesting it extend a deadline that otherwise could end efforts to build a state-funded regional school in the St. John Valley.

The Valley Unified partners — SAD 33, Madawaska School Department  and SAD 27 — faced a Dec. 31, 2020, deadline to agree in writing to form a Regional School Unit or lose a potential $100 million in state funding to build the grades 7-12 school, Education Commissioner Pender Makin told the group in the fall.

The SAUs failed to agree to the RSU during mediation on Dec. 21 and the communities await a decision by the state regarding the fate of the proposed new school.

At the heart of the impasse is the SAD 27 board’s opposition to the site selection process that resulted in a Frenchville lot being chosen for the location of the new school, and distribution of voting power on the Valley Unified board.

Under the current Valley Unified Interlocal Agreement in which SAD27 pays more than 50 percent of the bill (proportional to student population and valuation) but gets 33 percent of the vote, the majority of any costs would be covered by SAD 27 communities.

In a Jan. 1 letter addressed to district residents, the SAD 33 board expressed its feelings regarding the failed mediation effort.

“The Site Selection Committee was comprised of a non-biased representation of 17 diverse individuals representing all communities, which consisted of town and business leadership, post-secondary leadership,and primary/secondary school leadership,” the board wrote. “Unfortunately, MSAD 27 has remained unwilling to discuss any compromise; short of a full overhaul and redo of the already completed site selection process.”

The Madawaska School Department committee wrote a Jan. 4 letter addressed to residents of the town regarding the mediation process.

“The Madawaska School Committee has made concessions along the way in the interests of furtherance of the regional school project, such as agreeing to take two possible school sites in Madawaska off the site selection list and agreeing to include grades 7-8 in the new school; these concessions advance the larger goal of realizing a new regional school for the three school units,” the letter reads. “Ultimately, it is all about what is in the best interests of the students.”

In a post-mediation letter to district residents, the SAD 27 Board said the Frenchville site was selected because it was “politically expedient.”

“The proposed site does not even meet the state’s own guidelines about  preference given to the site that results in the minimum travel distance for the maximum number of students, the proximity to water/sewer facilities, proximity to essential services, or on-site and off-site costs,” the board said.

The SAD 27 board pointed out that the potential award from the state to build the new regional school would have been “up to $100,000,000,” and that amount was not guaranteed.

“It is delusional to think that there will not be additional costs borne by the local taxpayers,” the SAD 27 board wrote.

The Boards of Directors for SAD 33 and Madawaska School Department recently sent letters to the DOE and Commissioner Makin asking that the deadline be extended to July 1, 2021.

The SAD 27 Board also sent a letter to the DOE, requesting that the regional school project be removed for consideration from the Maine DOE Approved Projects List.

In a Dec. 30 letter to the DOE, the SAD 33 board sought the deadline extension stating that the educational challenges imposed by the COVID-19 pandemic of 2020 have interfered with the project timeline.

“Shortly after our straw poll for site selection in February, which the citizens of the St. John Valley were overwhelmingly in favor of the site selected (except for one town), our focus shifted from regionalization to COVID-19,” the SAD 33 letter said. “An extension of time would allow us to refocus our resources.”

A total of 1,708 residents from all three SAUs participated in the straw poll meant to gauge community support for a Frenchville site for the proposed regional school.

In its Dec. 30 letter to the DOE, the members of the SAD 33 board said they feel they can reach a compromise with the SAD 27 board, given more time.

“The MSAD27 board has four of their seven members up for reelection in March. We believe this will change the dynamics of their board allowing them to fully represent all the people and voices in their communities,” the SAD 33 letter said.

But support for the Frenchville site from all SAD 27 towns seems to have changed since the February straw poll.

In a Dec. 17 letter addressed to the SAD 27 board ahead of the Dec. 21 mediation, town managers from Fort Kent, St. John, New Canada, Wallagrass and St. Francis expressed their “full support” of the SAD 27 school board’s opposition to the Frenchville site for the proposed school.

“The current plan to relocate the school outside of Fort Kent would only destabilize local services to Fort Kent and its outlying communities,” the letter said. “According to statistics, we have managed to see growth for the communities of Fort Kent, St. John, St. Francis, Wallagrass, New Canada and Allagash, which cannot be said for other areas within the Valley.”

St. Agatha town manager Aubrie Michaud also wrote a letter to the SAD 27 board ahead of the Dec. 21 mediation.

Michaud wrote in her Dec. 15 letter to the SAD 27 board that if taxpayers were to vote in another straw poll, and if the vote were for whether to continue the process of school regionalization rather than for support of the Frenchville site, the outcome in Fort Kent would more strongly support continuation of the regionalization process.

Michaud also told the SAD 27 board that St. Agatha taxpayers would be unable to afford costs to repair school buildings in the town.

“It’s disheartening to listen to representatives of another district say ‘we don’t care. Our district will be fine.’ That statement is both selfish and short sighted,” Michaud wrote.

In their own letter to the Maine DOE dated Dec. 31, the SAD 27 board asked that the school regionalization project be terminated.

“Because there is no prospect of an agreement on the issues necessary to form a new governance structure, MSAD 27 does not believe there is any future for the Valley Unified construction project,” the SAD 27 Board wrote. “An extension would only cause further damage in our already divided communities.”

On Wednesday, Valley Unified Executive Director Ben Sirois said Valley Unified officials had not yet received any feedback from the Commissioner’s office or the State Board regarding the future of the regional school.

Low pressure will track from the western Great Lakes to the northwest of the Valley today and tonight, pulling a cold front across the region overnight into Thursday afternoon producing light snowfall for Fort Kent and vicinity.
Our Sponsors END_OF_DOCUMENT_TOKEN_TO_BE_REPLACED