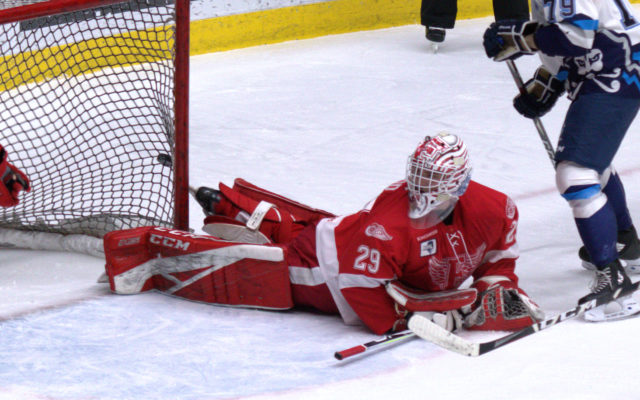 Paul Leroux puts an end to the suspense

Contributed • January 4, 2021
A goal from Paul Leroux with 4:02 remaining in the third period saw the Blizzard transform a 3-3 tie in a 4-3 victory over the  Fredericton Red Wings in a game of the Maritime Junior Hockey League (MHL)  played Dec. 29.

EDMUNDSTON, New Brunswick — A goal from Paul Leroux with 4:02 remaining in the third period saw the Blizzard transform a 3-3 tie in a 4-3 victory over the  Fredericton Red Wings in a game of the Maritime Junior Hockey League (MHL)  played Dec. 29 at the Jean-Daigle Centre in front of 1,399 spectators.

The Blizzard returned on the ice after a 25-day break caused by the orange phase  situation of Northwest Health Zone 4.

After taking a 3-0  lead in the first period on goals from Zachary Cadorette, Dylan Lang and Joshua Nadeau, the Blizzard saw the Red Wings bounce back with three goals in a row,  including the last two coming during the same penalty kill halfway through third.

Five goals were scored while the Blizzard had a man advantage. Edmundston scored three times on the power play and allowed two short-handed goals.

On the sequence leading to the winning goal, Leroux first won the face-off to the left of goaltender Andrew MacLeod. The puck went to defenseman Ben Lightbody, who took a wrist shot. Well positioned in the slot, Leroux deflected the puck that ended  up in the back of the net. Jérémy Duguay was credited with the goal, but the replay clearly showed he didn’t touch the puck. For captain Leroux, it was a third goal this  season.

Cadorette registered at least a point for 10 consecutive games, the number of games played this season by the Blizzard (8-1-0-1), who is now tied with the Grand Falls Rapids (7-2-0-3) at the top of the Eastlink North mini-division 1. Both teams have 17  points, but the Blizzard has two games in hand.

Named player of the month for November before the game, Joshua Nadeau has scored at least one point in his last nine games. His 10 goals are a league high he shares with Tyler Boivin of the Rapids and Bair Gendunov of the Truro Bearcats.

High pressure brings partly cloudy skies and mostly dry conditions today into tonight. Mostly cloudy skies are expected Thursday as an upper-level low drops down from the north/northwest with a slight chance for snow showers Friday night.
Our Sponsors END_OF_DOCUMENT_TOKEN_TO_BE_REPLACED