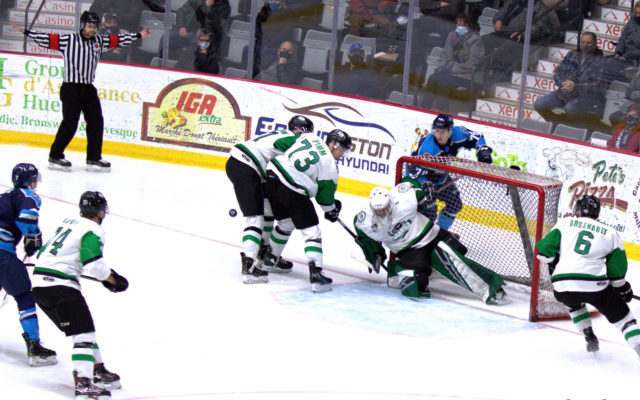 Paula Brewer, Assistant Editor • December 31, 2020
EDMUNDSTON, New Brunswick — For a second straight game, the Grand Falls  Rapids had the final say in a Dec. 30 shootout against the Edmundston Blizzard. In front of 1,446 spectators at the Jean-Daigle Centre in Edmundston, they  won 4-3 after avoiding a loss in the final minute of the third period.

EDMUNDSTON, New Brunswick — For a second straight game, the Grand Falls  Rapids had the final say in a Dec. 30 shootout against the Edmundston Blizzard. In front of 1,446 spectators at the Jean-Daigle Centre in Edmundston, they  won 4-3 after avoiding a loss in the final minute of the third period.

Trailing 3-2, the Rapids pulled out their goalie and the strategy paid off as Nash Smith tied the game with 36 seconds left in regulation. Neither team managed to score in overtime. Tyler Boivin of the Rapids sealed the outcome of the shootout.

In the last game between those two Northwest rivals, on December 4 in Grand Falls, the Rapids also won in shootout (3-2).

The Blizzard struck first in the Dec. 30 game thanks to Kevin Desjardins’ goal at 7:40 of the opening period. The Rapids, however, tied the game with 17 seconds to play in the period on a goal by Drew Toner.

The Rapids clearly dominated the second period which ended with the only goal, that of Evan Jackson at 12:32.

The Blizzard recovered in the third. A spectacular surge by Joshua Nadeau (2nd star) with a man advantage allowed the locals to tie the game 2-2 at 7:39. Four  minutes later (11:49) during another power play, Jérémy Duguay gave Edmundston a 3-2 lead. The Blizzard thought they were flying away with the victory but the Rapids never gave up and ended up getting away with the two precious points in the shootout.

Goaltenders Nolan Boyd of the Rapids (1st star, 31 saves) and Antoine Lyonnais of  the Blizzard (34 saves) stood up strong and contributed to keep the game at a low score. With two assists, defenseman Ben Lightbody earned the game’s third star.

Top scorers were Tyler Boivin (2a) and Joshua Nadeau (1g, 1a). Nadeau extended his streak with at least a point to 10 games. Teammate Zachary Cadorette saw his end at 10 games.

A weak disturbance will drop down from the northwest tonight triggering some snow showers across Fort Kent and vicinity as it moves through with no significant accumulation expected.
Our Sponsors END_OF_DOCUMENT_TOKEN_TO_BE_REPLACED