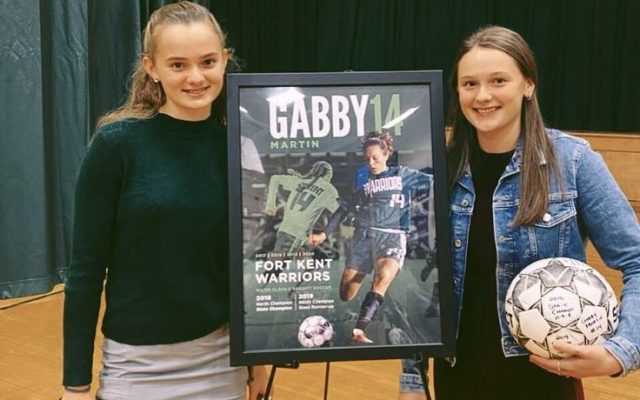 Maine Soccer Coaches is one of the state’s largest coaching organizations with 253 member schools, according to the organization’s website.

Martin said she is “beyond honored” by the award. “It makes me appreciate the opportunities I have been given,” she said.

Martin racked up an impressive list of achievements on the field as a Fort Kent Community High School Warrior, including having registered 50 goals and 18 assists.  She earned All Aroostook recognition all four years of high school, was named All State for three of those years, and All New England her senior year. 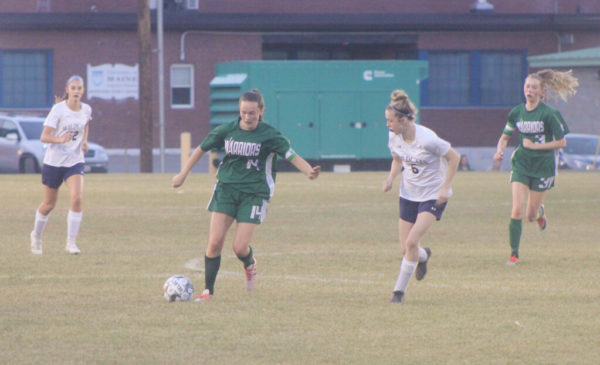 “Gabby has been a strong player for Fort Kent for the last four years,” Fort Kent Coach Doug Cyr said. “I would say her hard work and dedication to the team has allowed her to shine in the northern Maine region.”

The 2020 Warrior girls team may have very well achieved another state championship had it not been for a season altered by COVID-19.

“It was challenging to go into my senior year without even knowing if there really was going to be a season,” Martin said. “For months we practiced without any passing or game-like play. Most teams- this would discourage players, but instead we took advantage of conditioning and this helped us out as the season progressed.”

This dedication brought the Warrior girls, during an altered season to include only 9 games played among Aroostook County schools, to the Aroostook League championship, only to have the championship game against Caribou canceled due to the virus.

“It’s hard to say I even had closure to the season (because) our championship game was canceled,” Martin said.  “I know that my team did everything in their power to make it the best senior season and I thank them for that.”

Martin said she is thankful for her senior teammates, Lacy Pelletier, Sydney Philbrook, Shaylee Jandreau and Lyndsay Ouellette as well as for her coaches throughout the years including Merick Howard (Rasta) who trained her at University of Maine at Fort Kent this year, for contributing to her success.

“And most importantly thank you to anyone who talks to me about the games and comes to cheer us on no matter the weather conditions,” Martin said.

“I fell in love with the intensity of the game at an early age,” she said.

Gabby Martin is the daughter of Taylor and Stacy Martin of Fort Kent. She grew up with five soccer-loving siblings, Nadeya, Simone, Nancy, Isaiah and Maddie, with whom she practiced the sport.

“We all go shoot around and have healthy competition with one another,” Gabby Martin said.

In addition to being an award winning soccer player, Martin is a member of the National Honor Society, serves on the Fort Kent Community High School student council, is a student representative for board meetings and competes in track and field.

After graduation Martin plans to attend college where she will study health science.

A weak disturbance will drop down from the northwest tonight triggering some snow showers across Fort Kent and vicinity as it moves through with no significant accumulation expected.
Our Sponsors END_OF_DOCUMENT_TOKEN_TO_BE_REPLACED