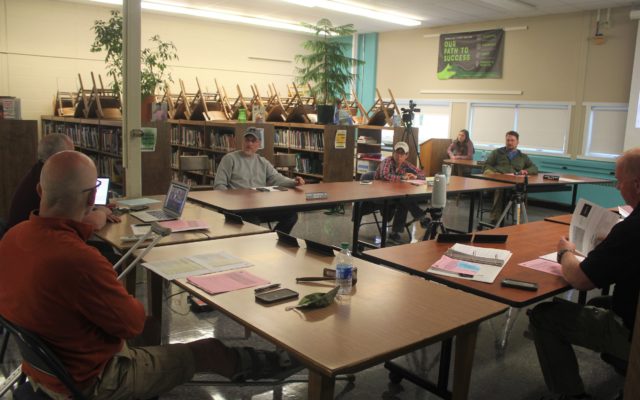 FORT KENT, Maine — Two Valley Unified employees addressed the SAD 27 board of directors at Monday’s board meeting to express their support for a proposed regional school in the St. John Valley.

Representatives of the board will enter into mediation on Monday, Dec. 21, with their Valley Unified Education Service Center partners to try to settle their differences over the proposed new regional school.

The three Valley Unified school administrative units — Madawaska School Department, SAD 33 (Wisdom) and SAD 27 (Fort Kent) have until Dec. 31 to sign an intent to form a Regional School Unit, per Maine Department of Education Commissioner Pender Makin, or face losing up to $100 million in state funding for the construction of a new regional high school. The project would still need final approval from the DOE.

Representatives for the three school administrative units attended a “Think Tank” meeting in October, but failed to reach consensus regarding the site of a proposed new regional school and whether to form an RSU.

A site selection committee previously chose a Frenchville parcel as the location for the school. But members of the SAD 27 board disputed the fairness of the site selection process, and a group of Fort Kent residents in January filed a complaint in Aroostook County Superior Court in Caribou asking a judge to put a temporary stop to the school consolidation process.

Also at issue with the partners has been distribution of voting power on the Valley Unified board. Based on a 2018 interlocal agreement entered into by all three school units, SAD 27 holds a third of the votes on the VU board, but is responsible for at least 50 percent of the Valley Unified budget, with that percentage expected to grow in the coming years.

Lavoie told the board that since it began operating in 1992 the tech center has served as a successful example of school regionalization in the Valley, as some students from each of the SAUs travel there for education.

Students who attend the tech center receive education in trades such as welding, construction and electrical construction, which are in demand in the local workforce.

“It’s very important that we consider educating our youth in those endeavors,” Lavoie said. “I have business owners knocking at my door all the time saying ‘I need your help.’ Our workforce is diminishing within five years by 50 percent.”

Lavoie said that if the school administrative units were to regionalize in one building, students would gain one hour of career and technology education each day, which he said would benefit students as well as the local economy.

“This is not all about education folks; it’s about economic development in the area as well,” Lavoie said.

Lavoie told the board members that their efforts at Monday’s mediation would have far reaching consequences.

Bernier entreatied the board members to try and reach a consensus with the other districts.

“I’m hoping that when you guys go to mediation next Monday that you are being forward thinkers and that you are using that open mindset that we’re speaking to our students about, because I’ve always been really proud to work in this district and I understand your concerns,” Bernier said.

Bernier said she had been a real estate agent for many years and told the board she does not feel a regional school in Frenchville will dissuade people from purchasing homes in the Fort Kent area.

She also said she feels it is too soon to know how the school will affect local taxes and that she recognizes the board members’ concerns regarding the site selection process.

“All of those things I think can be discussed by people who have that open mind and growth mindset,” Bernier said. “When I hear people say our minds are already made up…..that really disappoints me because you guys are representing us.”

“I think that if we give this money up and don’t provide this opportunity to our students that we’re really, really  gonna regret it because this is an amazing opportunity for us,” Bernier added.

Later in the meeting, board vice chair Barry Ouellette posed a question to his fellow board members.

“We had as a board voted that we were not going to follow through with the site selection,” Ouellette said. “What is the plan for SAD 27 if we do not participate with the site in Frenchville?”

“Our relationship with Valley Unified is going to continue,” Keith Jandreau Jr. said. “To say we’re going to go back to pre-Valley Unified, I don’t know that that’s feasible from an economic standpoint.”

Jandreau Jr. and several other board members noted the shared services between the three districts and indicated they would like for that relationship to continue regardless of the outcome of Monday’s mediation session.

“You all know my position on a regional school, but if that doesn’t happen that doesn’t mean we need to stop working together,” Sirois said.

A weak disturbance will drop down from the northwest tonight triggering some snow showers across Fort Kent and vicinity as it moves through with no significant accumulation expected.
Our Sponsors END_OF_DOCUMENT_TOKEN_TO_BE_REPLACED