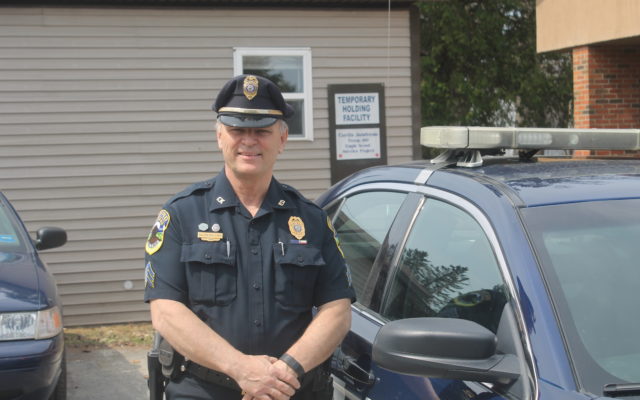 FORT KENT, Maine — Sgt. Dalen Boucher began protecting and serving the people of Fort Kent as a police officer in 1985.

Prior to that, Boucher worked on a potato farm, as an off-road truck driver, logger and parts man for a repair shop.

“But these jobs didn’t seem to fulfill my need to help people,” Boucher said.

A lifelong Fort Kent resident, Boucher, 60, is often referred to by family members as “The Boy Scout,” because when someone is in need, he is always the first one to roll up his sleeves and help out.

Fort Kent Police Chief Tom Pelletier has worked with Boucher for more than 30 years both as his police chief and while Pelletier patrolled the St. John Valley for the Maine State Police.

“Many times over the years he reached into his own pocket to help families in need and homeless people in need,” Pelletier said. “He bought food for families or bought kids toys at Christmastime. On a couple of occasions, he paid for motels so homeless people would have a place to stay.”

Boucher said he would not have wanted to be a police officer anywhere other than in his hometown.

“We have good people in Fort Kent, most of whom are willing to help other people in need,” Boucher said. “Fort Kent people are some of the nicest people around. If I ever needed a hand at an accident scene or for anything else, I could turn to and find a bystander who was willing to help.”

Fort Kent lead dispatcher CoCo Ouellette has worked with Boucher since she joined the department 20 years ago.

“He has kept things on track for the department during some difficult and trying times,” Ouellette said. “Sgt. Boucher was always there for us no matter what day or time it was to answer our calls when we had questions or needed assistance.”

“He is a big asset that the police department is losing, but the knowledge, integrity, patience, personality, dedication and ethics he has, and has taught us all, will be passed on through the department,” Ouellette said.

Pelletier said Boucher’s retirement is not only a loss to the department, but to the police profession as a whole.

“To see someone who has dedicated so much of their life to this job is truly rewarding — someone who has gained so much experience and knowledge in helping people throughout their career, it’s sad to see that go,” Pelletier said. “It’s the end of an era that we’re having a real hard time to start up again. Not everybody wants to be a police officer anymore so when we see a good one go it’s tough. He is a great officer, great person and great friend.”

Although retired from the police force, Sgt. Boucher continues to serve the community he loves.

“I am now helping out in removing snow from the streets, so it shows that the town of Fort Kent is a great place to work and I encourage people to work for the town if they get the chance,” Boucher said.

Public Works Director Tony Theriault attended high school with Boucher and said he had no hesitation in hiring Boucher.

“He was a top of the line police officer and he’s a super nice guy,” Theriault said. “We were lucky to have been able to get him.”

In addition to being a dedicated public servant, Boucher is also a devoted family man.

“I have been married to my great wife [Denise Boucher] for 38 years,” Boucher said. “I have three kids and I am proud of all of them. I have four grandkids and another on the way.”

When not working Boucher enjoys spending time with his family, hunting, fishing, riding an ATV, snowmobiling and camping.

High pressure north of the Valley will keep mostly sunny skies and cold conditions across the region today as an Arctic air mass settles into the SJV.
Our Sponsors END_OF_DOCUMENT_TOKEN_TO_BE_REPLACED