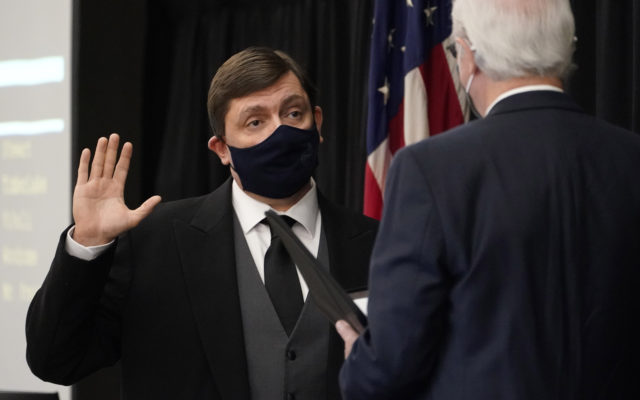 Jackson will be the first person from Aroostook County to serve two consecutive terms in the office.

Acting Chief Justice Andrew Mead administered the oath of office at the Augusta Civic Center to Jackson and his Senate colleagues, all of whom have been elected to serve two-year terms.

“It’s truly an honor to have earned the trust, respect and confidence of my neighbors to represent them in Augusta, and it’s humbling to have been chosen once again by my colleagues to preside over the Senate during this difficult moment in our state’s history,” he said.

“The Maine Legislature can and should do the same. It’s time to put the hostility of the election behind us and come together for the good of our state.”

Jackson is a fifth-generation logger from Allagash whose participation in the 1998 logging blockade along the Canadian border launched him into politics. He is a lifelong St. John Valley resident.

He lives in Allagash with his partner, Lana Pelletier. They have two adult sons, Chace and Camden.

Of the 35 senators, there are 22 Democrats and 13 Republicans. The Legislature will reconvene at the start of the new year.

Maine’s longest serving legislator, Martin was first elected to the Maine House of Representatives in 1964 when he was 23.
Our Sponsors END_OF_DOCUMENT_TOKEN_TO_BE_REPLACED