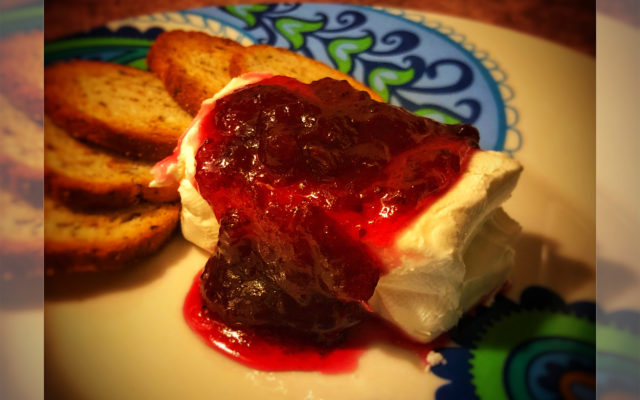 Morgan Mitchell • November 23, 2020
Look out Thanksgiving, it is the return of Dobie and our family recipes. For starters, because you can make it ahead and can it, we are going to go over cranberry sauce.

MADAWASKA, Maine — Look out Thanksgiving, it is the return of Dobie and our family recipes. For starters, because you can make it ahead and can it, we are going to go over cranberry sauce.

I am not talking about that jellified goo that slurps out of the can. I am talking about good ol’ fashioned cranberry sauce from scratch. And not that recipe on the bag either. No. This stuff will make you feel at home, no matter where you are.

So grab your cranberries and let’s get cooking. But first, a little background.

This will be my second year in a row away from family for Thanksgiving. Last year was exceptionally hard. I had been in Maine for seven months, and hadn’t seen my parents in four months (the longest I had gone without seeing them — ever). Lucky for me, I had the opportunity to spend Thanksgiving with my boyfriend and his family. Still, I was missing home.

I knew I wanted to contribute something for the Thanksgiving dinner, but I wasn’t sure what I wanted to make. [Spoiler Alert: I made extra dishes, and you can expect more later this month.] Then I remembered all those Thanksgivings at my grandmother, LeeMama’s house.

When it got to the point that the sisters (my mother and her sisters) and their children started to take over Thanksgiving cooking, LeeMama, in her 4-foot 9-inch glory, would hover over the stove to inspect what the cooks were doing.

The first year Dobie, my Aunt Joni, taught me how to make cranberry sauce, I remember standing at the stove stirring the pot when LeeMama walked over. She watched me stir for a minute and then added some more sugar.

“Keep adding some,” she said with an impish smile. “Maybe it will sweeten your disposition.”

She made that joke about any sweet and it never got old.

I went to pull the yellow plastic spoon from the pot, and to my dismay, realized I had just stained the thing purple. I was so worried LeeMama would get sad or angry.

She just chuckled and walked away. Oh, how I miss her.

I thought of these things as I stood over the stove at my boyfriend’s parents’ house making the same cranberry sauce. I wasn’t with my family, but I felt at home thinking of them and smelling that same smell. The smell of home.

— One bag of fresh (or frozen) cranberries

— Zest of one orange and some of the juice

In a large pot, pour in the water and stir in the sugar. Slowly pour in the cranberries. Add the orange zest and juice, then add the spices.

Cook the mixture on medium to high heat with the lid half on, stirring occasionally until it thickens (around 1-2 hours). Allow to cool, as it will thicken as it cools. Enjoy with your Thanksgiving meals, or over cream cheese with crackers.

Note: Dobie suggested that I add a little kick to the cranberry sauce and with a fresh diced jalapeno. I will try that next time. Stay tuned.

Morgan’s Recipe Series is an occasional column to bring recipes from all over the United States to the Valley for all sorts of holidays and family functions.

Low pressure south of Nova Scotia and its associated upper-level low pressure area will continue to draw moisture over the area aloft keeping plenty of clouds as well as a chance for some scattered showers through the afternoon.
Our Sponsors END_OF_DOCUMENT_TOKEN_TO_BE_REPLACED