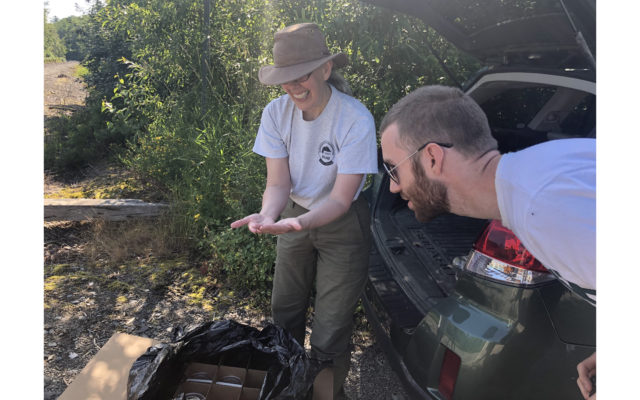 Contributed • November 21, 2020
The Maine Department of Agriculture, Conservation and Forestry's Maine Forest Service on Nov. 19 reported evidence of spread of emerald ash borer within regulated areas of Maine, including in Aroostook County.

AUGUSTA, Maine — The Maine Department of Agriculture, Conservation and Forestry’s Maine Forest Service on Nov. 19 reported evidence of spread of emerald ash borer within regulated areas of Maine, including in Aroostook County.

This fall, EAB infestation was confirmed in Van Buren following a sampling of 33 ash trees that had been girdled, which means having the bark specially peeled from a section of the trunk. Trees from Frenchville and Grand Isle also tested positive for ash borer.

A total of 16 trees were sampled from the above communities, as well as Fort Kent, Houlton, Limestone and Wade. Trees in those areas returned no positive findings, according to the Forest Service.

The pests were found in York County in Gorham, Newfield, Ogunquit, Parsonsfield, Shapleigh and South Berwick.

Emerald ash borer was first detected in Maine in 2018 in both Aroostook and York counties. It was also found in 2019 through trapping in Cumberland County. These detections have led to quarantine regulations in all of York and Cumberland Counties and parts of Oxford and Aroostook Counties. Although EAB has not been detected in any new counties in 2020, Maine Department of Agriculture, Conservation and Forestry monitoring programs show EAB populations are expanding within already-regulated Maine areas.

Each spring, Maine Forest Service staff and volunteers from many sectors help detect the pests by participating in the girdled trap tree network. Girdled ash trees are attractive to the insects. The trees are felled in the fall, and sections of them peeled to look for EAB activity. These trap trees provide a good low-tech detection tool that can be used wherever ash trees grow. 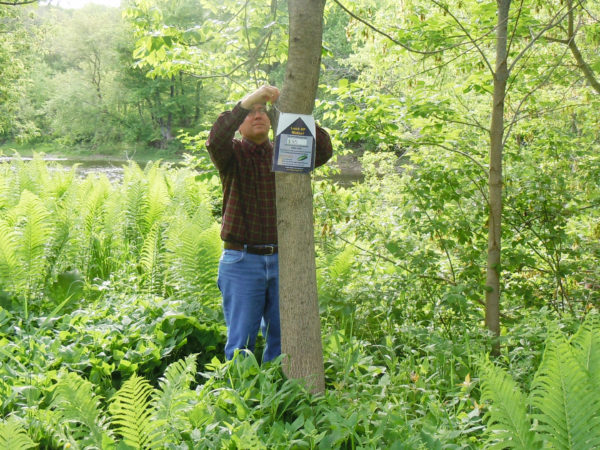 Maine District Forester Dan Jacobs hangs a tree tag on a white ash in Riverfront Park along the Meduxnekeag River in Houlton in 2019.
(Courtesy of Angie Wotton)

In 2020, at least 34 trees were girdled across 8 of Maine’s 16 counties, and nearly all have been processed. Over the past 10 years, the process has included interested landowners, forest managers and others. This year, to reduce the risk of COVID-19 transmission, processing was conducted by the Forest Service, the city of Portland and Acadia National Park staff.

Of the 33 trees processed, nine showed signs of EAB, including exit holes, larval evidence and larvae. The nine positive trees were within the area currently regulated by the EAB quarantine.

“The Maine Forest Service is extremely grateful for the continued support of the public in responding to EAB,” Teerling said. “In particular, we thank the volunteers in the girdled trap tree network who contribute their time and their trees and people who observe damaged trees or suspicious insects and then make an effort to report them.”

The spread of EAB in southern Maine, which is on the leading edge of the insects distribution, is more significant than that in the smaller infestation center in northern Maine, department officials said. In both cases, the natural spread is inevitable and may be slowed using biological controls to reduce population and careful ash management. A more significant impact on the spread can be had through targeting human-caused movement: by observing best management practices for handling ash within regulated areas, following quarantine rules, using local or heat-treated firewood, and avoiding using ash in new tree plantings.

State officials advised those who girdled an ash trap tree which has not been processed to call the Maine Forest Service Insect and Disease Lab at 207-287-2431.

Additionally, anyone who purchased an ash tree from Lowe’s in Maine this year should report it to bugwatch@maine.gov or call 207-287-7545. As of Nov. 13, 30 of the 36 trees sold have been located. Anyone who sees emerald ash borer insects or evidence should report it at maine.gov/eab.

SJV Weather for April 7 - 13, 2021 Low pressure south of Nova Scotia and its associated upper-level low pressure area will continue to draw moisture over the area aloft keeping plenty of clouds as well as a chance for some scattered showers through the afternoon.
Our Sponsors END_OF_DOCUMENT_TOKEN_TO_BE_REPLACED