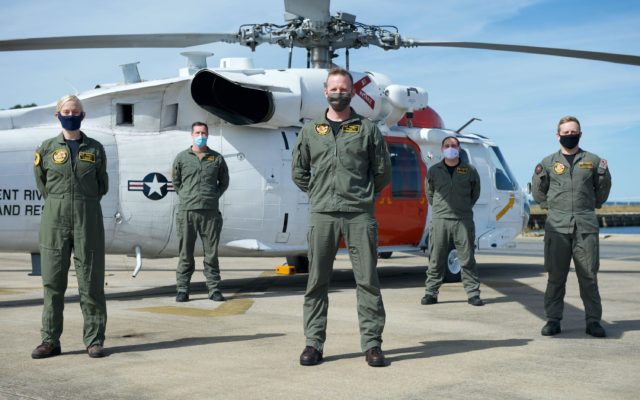 Jessica Potila, SJVT / FhF Staff Writer • November 16, 2020
A northern Maine native who became a helicopter pilot in the United States Navy was instrumental in saving the lives of four aviators who went down in the Atlantic Ocean.

EAGLE LAKE, Maine — A northern Maine native who became a helicopter pilot in the United States Navy was instrumental in saving the lives of four aviators who went down in the Atlantic Ocean.

Lt. Derek Pelletier, 32, originally of Eagle Lake, was co-pilot of  Watchdog 765, an MH-60S helicopter assigned to Naval Air Station Patuxent River’s Station Search and Rescue division. He was in one of two crews that responded to an aircraft emergency when an E-2C Hawkeye crew bailed out of their aircraft near Wallops Island, Virginia,  last summer.

As a result of the mission, which included Pelletier’s efforts, all of the imperiled Hawkeye crew members survived.

Lt. Pelletier’s parents are Fort Kent Police Chief Tom Pelletier and his wife, Carol Pelletier, who still live in the family home in Eagle Lake where Lt. Pelletier grew up along with his sister Jamie Pelletier.

Lt. Derek Pelletier is a 2010 University of Fort Kent graduate who during his junior year at UMFK served as a wilderness firefighter in northern Quebec.

Chief Pelletier, who also served in the U.S Navy, said he is very proud of his son.

“He’s working with a team of professionals that successfully located and rescued the victims of the crash,” Chief Pelletier said. “We’re extremely proud he has chosen a path to serve his country.”

Carol Pelletier said she is also proud to see that her son is achieving his dream to become a helicopter pilot, something he told the family he had planned to pursue after fighting the Quebec wildfires.

“Ten years ago, when he came back from fighting fires in Canada, and said that he wanted to fly helicopters, did I really imagine that was going to be his life,” Carol Pelletier said. “I’m extremely happy that all of his hard work in preparing for situations like this paid off.”

The military helicopter pilot currently lives in California, Maryland, where he continues to serve his country in the U.S. Navy.