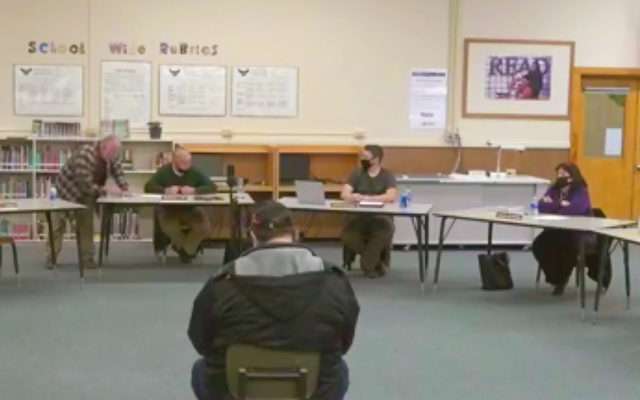 Morgan Mitchell • November 13, 2020
The Madawaska Board of Selectmen might be down a member after Dan Daigle made a dramatic exit at Thursday’s board meeting after writing his resignation longhand and signing it on his way out the door.

MADAWASKA, Maine — The Madawaska Board of Selectmen might be down a member after Dan Daigle made a dramatic exit at Thursday’s board meeting after writing his resignation longhand and signing it on his way out the door.

The board tabled accepting the resignation in hopes to work something out with Daigle.

Near the end of the meeting when the board finished going over the agenda items, Chairman Doug Cyr brought up a document that outlined the code of ethics for the Madawaska town manager. In the document, Cyr called special attention to a section about how town managers should refrain from the political scene.

After Cyr pointed out the rule, the board had a heated discussion over a Facebook post in which Selectman Dan Daigle allegedly replied to the post, ultimately with the comment “[Town Manager] Gary [Picard] needs to go,” according to Cyr.

St. John Valley Times/fiddleheadfocus.com was unable to locate the original Facebook post and it was not read out loud during the meeting.

Daigle said he was upset with Picard for not going to greet Sen. Susan Collins when she came to Madawaska prior to the election. While reading the code of ethics passage, Cyr said that Picard was acting within the code of ethics by not engaging during political races.

Daigle defended his comments on Facebook and ended up resigning on the spot.

“The intent was only to make him aware of the damage he could do,” Cyr said after Daigle walked out of the meeting.

Picard said he and some board members have endured “two and a half years of coordinated harassment,” alluding to what was previously referred to by the board as a Facebook smear campaign targeted toward the town manager, finance director and eventually economic development director.

“Every time someone tries to do something good, someone starts a fire,” Picard said.

The board then decided to table accepting the resignation letter.

In an interview Friday, Daigle said he felt attacked and ambushed and would no longer be speaking with the manager or the board. Instead, Daigle said he has enlisted the help of Luke Rossignol of Bemis and Rossignol Law Offices.

“There is nothing that I posted on Facebook that is derogatory or not factual,” he said.

Daigle said that as the discussion escalated, so did his blood pressure.

“When I saw I wasn’t going to make any ground with the chairman, or the board or the town manager, I just elected to resign,” he said.

Daigle said that the three other general board members were blindsided by the events that he felt should have been taken up in executive session, and that he suspects that this was “fueled by Town Manager Gary Picard, based on his auration after [Daigle] left.”

“He was not there to participate in the election,” he said. “Susan Collins mentioned the name of our town on the Senate floor … she funneled $36 million for the construction of a new bridge that will provide more jobs … Gary Picard could not even come out and shake Susan Collins’ hand and say ‘Welcome to Madawaska’, and I think that as a town manager that is totally unacceptable and he needs to be called out on this.”

Daigle said that he was done speaking with the board and town manager and that he will be working with his lawyer here on out.

“To do what they did to me publicly violates my rights,” he said.

A cold front will approach tomorrow with a chance for snow showers through the day into the evening. The front is expected to move through tomorrow night with another Arctic air mass.
Crown Politics END_OF_DOCUMENT_TOKEN_TO_BE_REPLACED

Three candidates are vying for two seats on the Fort Kent Town Council. Voters will decide which of the three -- Corey Pelletier, Brandon Dayton or Andrew Caron -- will get a seat during the town’s annual election on Monday, March 22.
Our Sponsors END_OF_DOCUMENT_TOKEN_TO_BE_REPLACED