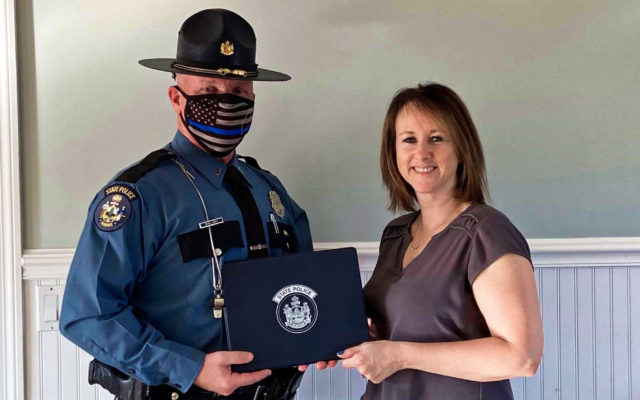 Janice LaBrie, 50, of St. Agatha was driving along Route 162 headed to Presque Isle with her daughter when she noticed a man lying in the roadway near the boat landing.

The registered nurse stopped to render assistance to the man, who had suffered from a  cardiac problem.

“I immediately checked for a pulse and checked to see if he was breathing — he wasn’t, so I began doing chest compressions,” LaBrie said.

LaBrie’s heroic efforts saved the man’s life, but she did not stop there.

With the encouragement of Jennifer Daigle, owner of Lakeview Restaurant, and the assistance of Dr. John Joseph, an emergency room physician at Northern Maine Medical Center, LaBrie organized a CPR class at the St. Agatha restaurant to teach other community members CPR skills.

“This was certainly a team effort between Lakeview Restaurant, Madawaska Ambulance, and Northern Maine Medical Center,” LaBrie said. “I’m proud of the fact that our community came together to provide valuable training for what could be the difference between life or death for someone.”

Maine State Police shared on their Facebook page that LaBrie was in the right place at the right time when the medical episode occurred.

“Janice’s quick thinking and decisive actions were instrumental in saving the man’s life as she and responding troopers performed CPR until the ambulance arrived,” the post read. “The man survived this incident solely on the actions and quick thinking by Janice.”

A 2011 Northern Maine Community College graduate, LaBrie works in the emergency room at Northern Maine Medical Center. Prior to that, she served as an intermediate EMT.

LaBrie said providing life-saving measures is just part of her job and did not think twice about taking action to help the man who was in distress.

“I took an oath when I became a nurse to protect a patient’s safety and do no harm. I did the best I could with the situation; I’m happy that I was able to make such a difference in someone’s life,” she said. “The experience I have received while working in the ER and the continuing education that Northern Maine Medical Center has provided, certainly had a profound effect on the skills I used that morning.”

LaBrie added that she feels the life-saving measures were also due to the quick responses of the Maine State Police, Aroostook County Sheriff’s Department and Madawaska Ambulance.

“God certainly had a hand in placing us where we needed to be that morning to save this man’s life,” she said.

Janice LaBrie and her husband Duane LaBrie are the parents of three children — Kyle, Carson and Paige.

The 500-millibar upper-level trough associated with the cold front and low pressure that brought last evening's thunderstorms will slowly move over the Valley today and Thursday with a chance for scattered showers and an isolated thunderstorm or two across the Valley this afternoon.
Our Sponsors END_OF_DOCUMENT_TOKEN_TO_BE_REPLACED