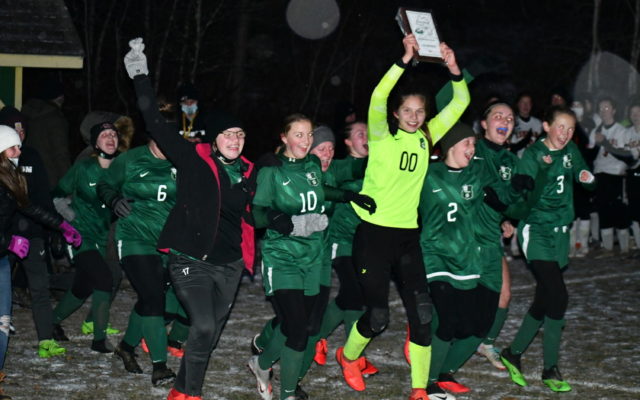 The two squads were knotted in a scoreless stalemate through the first 40 minutes of action.

Ashland broke the scoring ice in the second half as Kayla MaClain gave the Hornets a 1-0 lead. Liv Ouellette of Wisdom evened the score with help from Abbie Lerman, leaving the game knotted at 1-1 at the end of regulation.

The soccer field at Wisdom High School does not have lights, which made playing extra periods tricky. But the two squads battled through two scoreless overtime periods, sending the game to penalty kicks.

“After [overtime] we went into penalty kicks on a dark pitch illuminated by the lights of the scoreboard,” Wisdom coach Peter Clavette said.

With the outcome resting on the fate of penalty kicks, Wisdom goalie Emma Chamberland turned back two of the three shots sent her way, while Lilly Roy, Maddy Picard, Abbie Lerman and Colleen Thamsen were each successful in their shots, giving Wisdom the 4-1 edge in kicks.

“This season for the Pioneers and myself was about redemption, about making a name for ourselves, but most of all it was about building a family,” Clavette said. “As one of the smallest schools in Aroostook County, we fight against larger, more established programs and prove we are a capable and determined adversary. Most importantly, we proved we are worthy.”

The Pioneers ended their season with a 9-1 record and only seven goals scored against them for the entire season. They scored a total of 37.

“I couldn’t be more proud of what these kids have accomplished,” Clavette said.

The last time Wisdom won a championship game was back in 1998. Wednesday’s game was the championship for the Aroostook League and came as the culmination of a 10-game shortened soccer season caused by COVID-19.

A warm front will lift across the SJV this Wednesday with overrunning snowfall likely over the course of the day, with Fort Kent and vicinity receiving accumulations around 2 to 4 inches.
Our Sponsors END_OF_DOCUMENT_TOKEN_TO_BE_REPLACED