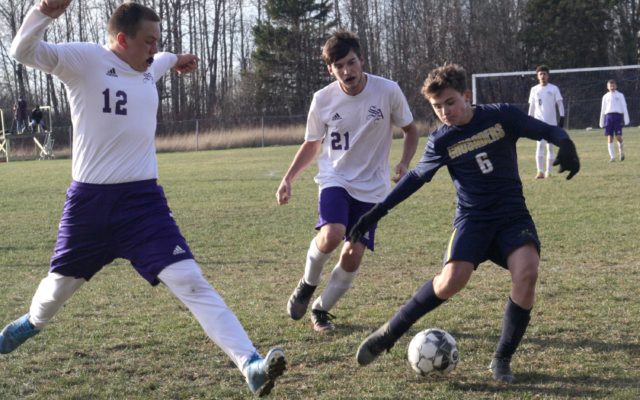 Van Buren (7-2 overall) scored early and often, maintaining a lead over Southern Aroostook (3-5-1) for the entire game. Now, the Crusaders will face No. 2 Easton for the championship. That game will be played at 2 p.m., Friday, Nov. 6.

Friday’s game began at 2:30 p.m., but that didn’t stop the weather from dipping into the low 30s. Nearly 50 people attended, all bundled in winter clothes before the beginning of November.

Van Buren coach Steve Lapierre thought his team had performed well, setting the game’s tone with a lead early in the first half. He plans to keep his players “intense,” working hard to compete with both of their potential opponents’ aggressiveness.

“They are both well-coached,” Lapierre said. “Either one is going to be a battle.”

Van Buren’s Gabriel Morales scored shortly after the game began, giving the team a 1-0 lead. He would add four more goals through the halves, with five total on the day in what was a tremendous performance.

Van Buren’s Noah Martin and Henry Hebert also scored goals in the first half, bringing the Crusaders to a 5-0 lead. The Warriors’ first offensive life came with 12 minutes left, when Camden Porter scored a goal with an assist by Xavier Morales, making it 5-1 Van Buren.

Though Southern Aroostook tried to put some goals on the board in the second half, it wasn’t able to get anything past Van Buren goaltender Kolby Searles. With new goals from Hebert and Martin and two from Morales, the game was 9-1 with 27 minutes left. It would end up being the final score.

High pressure over the Ohio Valley this morning will drift into the Middle Atlantic tonight and into the Southeast US Thursday night.
Our Sponsors END_OF_DOCUMENT_TOKEN_TO_BE_REPLACED