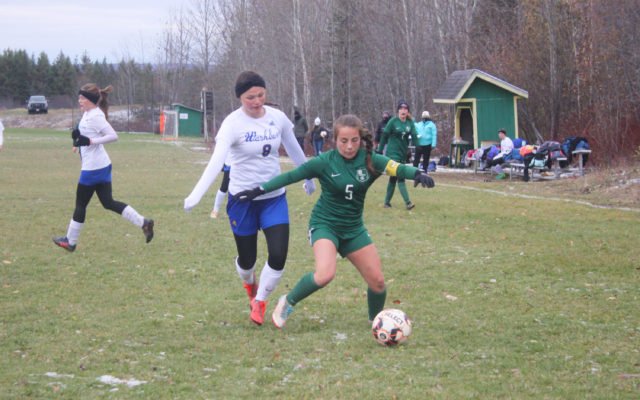 The Pioneers (8-1 overall) maintain home field advantage when they take on No. 2 Ashland (7-2) in the Aroostook County championship game 2 p.m. Wednesday, Nov. 4, at St. Agatha. Ashland beat No. 3 Katahdin 6-0 in the other Division 2 semifinal Thursday.

Sophomores Abbie Lerman and Olivia Ouellette each scored two goals for Wisdom, with Lerman assisting on both of Ouellette’s goals. Oullette assisted on one of Lerman’s goals and Lilly Roy registered the other assist.

“We knew we could compete,” Lerman said of winning the semifinal game.

“We knew we were ready to face any challenge that was given to us,” Ouellette added.

SAD 33 athletic director Scott Pelletier said one reason the Pioneer girls are playing so well is due to a new head coach, Peter Clavette, who said his goal going into the season was for the girls to make it to the championship game.

“I knew how strong this team could be,” Clavette said. “I put a system together and everybody committed to the process.”

Clavette said the girls will take a day off to recover before preparing for the championship.

“What’s been done is done as far as the training is concerned, it’s just about keeping our touches tight and that sort of thing,” he said. “I personally do a lot of film watching. I pay a lot of attention to the other teams and we prepare our game plan based on the opponent that we’re gonna play.”

Wisdom has beaten Ashland twice during the season, 1-0 and 3-2. The Pioneers’ only loss was against the Division 1 Fort Kent Warriors, 2-0. Wisdom later went on to defeat the Warriors the following week 3-1.

Whether the Pioneers win the championship the players already feel victorious. “I’m really proud of our team and what we’ve accomplished; we’ve made a name for Wisdom,” Ouellette said.

Washburn Coach Marcie Barbarula said she is proud of her girls for their efforts throughout the season. “They improved with each game and it was an odd season but they never gave up,” Barbarula said. “They worked hard together as a team, a small team with not many subs.”

High pressure over the Ohio Valley this morning will drift into the Middle Atlantic tonight and into the Southeast US Thursday night.
Our Sponsors END_OF_DOCUMENT_TOKEN_TO_BE_REPLACED