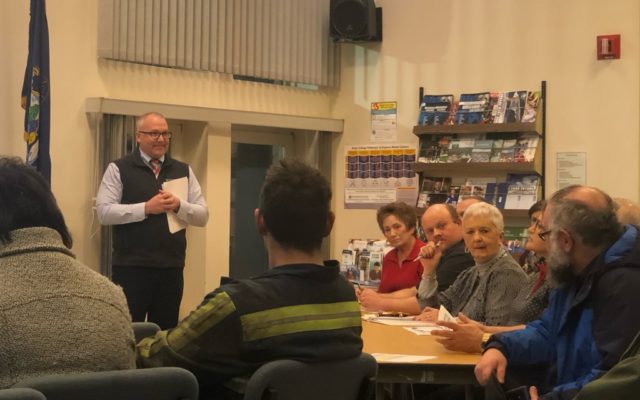 FORT KENT, Maine — Leaders of the three teachers associations representing educators in the school administrative units comprising Valley Unified Education Service Center have drafted a letter in support of a proposed regional high school and the superintendent who initiated the project.

SAD 27 (Fort Kent, St. John Plantation, St. Francis, Wallagrass and New Canada), along with SAD 33 (Frenchville and St. Agatha) and Madawaska School Department, entered into an interlocal agreement in 2018 to form Valley Unified with the aim of building a state-funded regional school to address declining enrollment and rising costs in education.

The three school association presidents, along with their respective vice presidents, met on Saturday morning to prepare the letter, which has since been sent to school board members in SAD 27, SAD 33 and Madawaska School Department.

That is because Valley Unified Teachers’ Association does not officially exist, although the three associations share common interests.

Clapp said representatives of the three teachers associations have been meeting for awhile now to discuss routine contract negotiation issues. Clapp said it is only natural the teachers would meet since their respective school units share administrative staff through Valley Unified.

“We wanted all three boards to know that the teachers associations are all in full support of our superintendent …” Jenny Bechard, vice president of Madawaska Professional Educators, said on Wednesday. “We wanted the boards also to know that we want this project to go forward because of what a great opportunity it is for the students of the Valley.”

“We’re scared we’re gonna lose this project because one of the boards is adamant that they are not happy with the site selection,” Bechard added.

The SAD 27 Board of Directors expressed its intention to withdraw from Valley Unified Education Service Center in an Aug. 26 letter addressed to the other two school units.

The SAD 27 board also raised concerns in the letter about the outcome of the Valley Unified school site selection straw poll.

A non-binding Feb. 13 straw poll saw a total of 1,708 residents in the three districts vote in favor of a Frenchville site for the new school. Voting in SAD 27 was tied at 419 yes and no votes. Fort Kent — the largest town in the district — voted against the project 350 no to 327 yes.

Before the straw poll, a group of Fort Kent residents filed a complaint in Aroostook County Superior Court in Caribou in January asking a judge to put a temporary stop to the school consolidation process.

Clapp said it was time for the teachers association to speak up and share with the public its position regarding the Valley Unified project, especially now that the Maine Department of Education has placed a Dec. 31 deadline on the three units to agree to form a regional school unit or else lose out on up to $100 million in state funding for the proposed school.

“We feel that no site selection process would have been perfect or would have pleased everyone. With that being said, the three Associations continue to support the site so the project can move forward,” the teachers association letter reads.

Clapp reached out to the 48 teacher members of Northern Aroostook Educators Association to measure their support for the letter.

“The union doesn’t represent the entirety of the community — the union represents the union membership,” he said.

Although not all of the SAD 27 teachers replied, Clapp said of those who did, 5-1 were in favor of sharing the letter with the school boards.

“As union president I do have to represent the membership. and I knew in a split community there would probably be a certain amount of split in the membership too,” Clapp said. “Even the ones who disagreed qualified their statements with things like, ‘I agree with the idea, but I have concerns about the method’ or things like that.”

The letter also specifically addresses Valley Unified Executive Director and Superintendent of all three school units, Ben Sirois: “We also are concerned the current conflict about the site selection process is being unfairly blamed on our Superintendent of Schools. We may not always agree with him, but we support the vision for the future of education in the Valley that he has worked with us to develop through the Valley Unified Education Service Center.”

“The politics of this has been ugly and damaging,” Clapp said. “The people that do not want it to succeed may see Ben as the one pushing for it to happen. He’s been taking it on the chin and to move forward throughout the years, I’m sure it was brutal. I think leadership at that kind of a level takes a certain amount of courage and a willingness to persevere when people are stridently against you because they perceive they’re gonna lose on an issue they care about deeply.”

Sirois said he only learned of the letter Tuesday evening and “did not have any knowledge of the teachers’ unions taking this position.”

High pressure over the Ohio Valley this morning will drift into the Middle Atlantic tonight and into the Southeast US Thursday night.
Our Sponsors END_OF_DOCUMENT_TOKEN_TO_BE_REPLACED