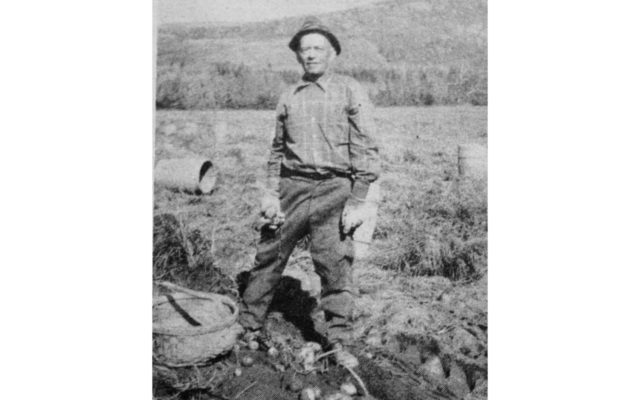 Frenchville hunter tells “bear” facts — Gerard Collin of Frenchville will have some real hair-raising stories to tell for a long time, when he recalls the adventures of opening day, 1970. He poses above with the 280 pound bear he shot and the doe his wife brought down on their first hunting trip of the season last Thursday.

“I first saw the bear about 200 feet away and shot it with my 30-30, “he begins. “The bear went down and I thought it was dead, but the next thing I knew it was up, had discovered where I was and was headed right at me.” Collin admits that it took four shots before the bear finally died and by the time it went down for good he estimates it was only about 20 feet away from him.

To show art of spinning — Mrs. Euphemie Ouellette of Lille demonstrated the art of spinning and carding at the second annual crafts fair sponsored by Northern Maine Artisans of Presque Isle. She and other members of the senior citizens center from Van Buren had several exhibits at the fair.

It’s ‘1-2-3 Red Light’  — Local history was made recently when eight traffic lights were turned on for the first time. Like it or not, the Valley has its first set of traffic lights located on the corner of Main Street and Pleasant Street in Fort Kent. Kenneth “Doody” Michaud, Fort Kent police chief, said that there are a few rules citizens must know in order to make this light as effective as possible. “In order for the light to change properly, people must stop on the first white line on Pleasant Street, equal to the median. If you go beyond that line, the light will not change due to the fact that the sensors in the ground cannot pick up that you are there. It was done this way so that tractor trailers can also make it around that corner,” said Michaud.

Lions drop golf balls in unique fundraiser — The Fort Kent Lions Club held a golf ball drop fundraiser during the weeks prior to their grand opening of the Lion’s Pavilion at Riverside Park. At the opening, a barrel of golf balls with ticket holders’ numbers on them were dropped to the ground from a crane about three stories in the air. The balls were dropped directly above a golf hole, each ball having an opportunity to land in the hole. Grand prize was $3,000. All winners gave most of the money back to the Lions Club for its Pavilion fund.

Deep low pressure near Newfoundland will keep breezy conditions across the SJV today and tonight as it interacts with high pressure building down from the northwest.
Our Sponsors END_OF_DOCUMENT_TOKEN_TO_BE_REPLACED