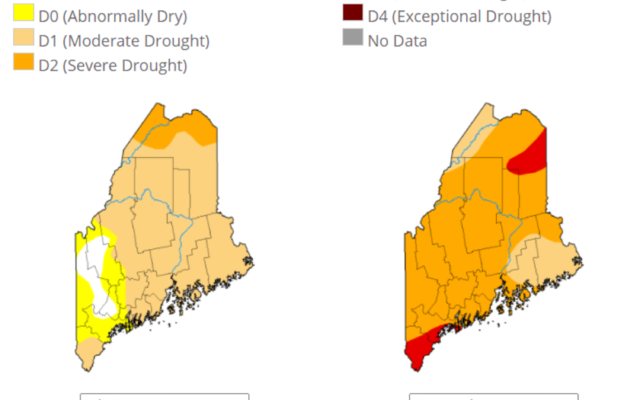 Aroostook in week 14 of drought

Morgan Mitchell • October 2, 2020
Aroostook County has officially entered week 14 of a severe -- and in some areas extreme -- drought as surrounding counties enter into week eight with little relief from recent rains.

MADAWASKA, Maine — Aroostook County has officially entered week 14 of a severe — and in some areas extreme — drought as surrounding counties enter into week eight with little relief from recent rains.

Most of The County is at extreme drought status, or D2, which is characterized by low soil moisture, lack of widespread rainfall, drying vegetation and low stream flows. But a portion of central to northern Aroostook is categorized at a D3 extreme status, according to the United States Drought Monitor.

While Aroostook was hit with a storm Wednesday, Corey Bogel, meteorologist at the National Weather Service in Caribou, doesn’t think it was enough to make much difference.

“The recent rains are certainly beneficial, but likely not enough to change the drought categories, or at least not enough to make sweeping changes,” Bogel said.

Tom Gordon, public service coordinator for the Maine Department of Agriculture, Conservation and Forestry also agreed that while the rain provided “mild relief,” there is still a ways to go.

“The recent rain provided mild relief for the western mountains,” Gordon said. “However, drought conditions persist, and it will take substantial and persistent rains to bring conditions back toward normal. Autumn tends to be our rainiest season, so we can hope that several steady rain storms will be in our future.”

Gordon said there was a significant impact on most major crops in Aroostook including hay, potatoes, blueberries and apples. He added that the record low stream flows have affected the water quality and aquatic life.

Gordon said the Farm Service Agency has been getting inquiries for the emergency relief programs, but that it is too soon to tell how things are going with the programs.

“Unlike hurricanes and ice storms, droughts tend to be slow-motion events,” Gordon said. “We will be gathering information on impacts over many months.”

A weak disturbance will drop down from the northwest tonight triggering some snow showers across Fort Kent and vicinity as it moves through with no significant accumulation expected.
Our Sponsors END_OF_DOCUMENT_TOKEN_TO_BE_REPLACED