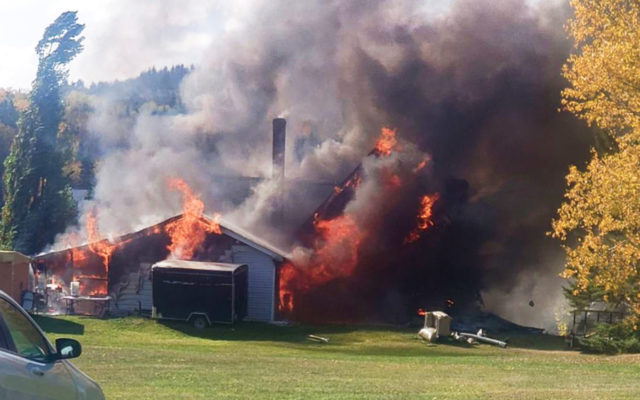 WALLAGRASS, Maine — A Wallagrass home was destroyed by fire on Tuesday afternoon.

Thirteen volunteer Fort Kent firefighters along with three engines, the tower ladder and heavy rescue truck arrived shortly after 1 p.m. at a residence at 11 Bouchard St. after a neighbor called 911 to report the fire.

By the time firefighters arrived, the home was engulfed in flames.

The home was located in the Soldier Pond area of Wallagrass, so firefighters were able to pump water from the Fish River to battle the blaze.

Homeowner Marcel Lavigne was out hunting with his dog when the fire broke out. 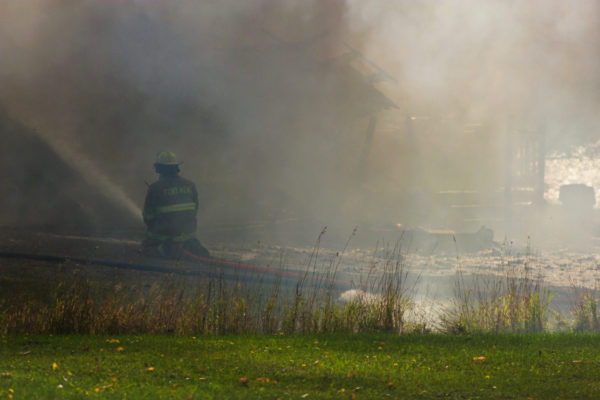 A Fort Kent volunteer firefighter is surrounded by smoke as he hoses down a fire at a Wallagrass home on Tuesday. (Jessica Potila | St. John Valley Times)

“Because of the extent of the destruction of the building, [investigators] were unable to come up with a specific cause,” Fort Kent Fire Chief Ed Endee said. “The owner is from California and was there doing some remodeling earlier and left to go hunting. When he came back, we were there.”

“As always, all of the firefighters who responded did a great job, but because the fire had gained complete control before we got there, we were unable to quickly put it out,” Endee said.

The firefighters left the scene at 8:30 p.m.