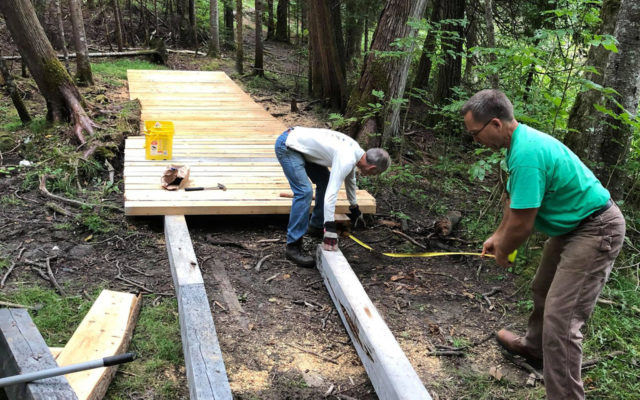 The airport recently received a new picnic shelter area, including a picnic table, all funded and constructed by Fish River Flying Club.

Fish River Flying Club is a volunteer organization composed of pilots whose aim is “making sure the airport thrives,” according to club treasurer George Dumond.

The town of Fort Kent owns the airport which is maintained by the flying club.

The primary purpose is to allow local people who are hiking to the falls from the airport to enjoy a picnic before or after the hike, Dumond said.

“It is also for the purpose of pilots who fly in and want to camp overnight; it gives them a site to camp at,” Dumond said. 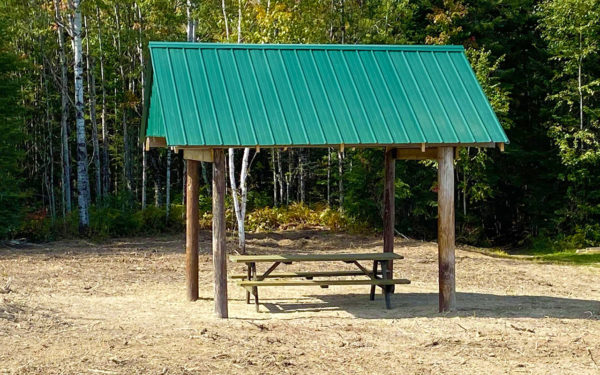 In both cases, the improvement has the benefit of attracting folks to the area.

“The more you have there for amenities, the more chances are people will want to make that as a destination,” Dumond said.

Volunteer members of the Fort Kent Bike and Pedestrian Committee are also completing a new walkway next to Fish River Falls, the trail entrance of which is located adjacent to the airport.

Bike and Pedestrian Committee members Jim O’Malley and Don Audibert, along with Dumond, who is not a member of the committee, constructed the walkway.

“Jim O’Malley contacted me a few months ago regarding a wet area in the trail where canoers and kayakers portage around Fish River Falls,” Bike and Pedestrian Committee member and Fort Kent director of economic planning and development Steve Pelletier said. “He volunteered to install a 50-foot cedar bog bridge so that people could traverse over a dry structure.”

The cost for the materials to complete the project was about $600, which the committee funded.

“The Bike & Pedestrian Committee’s goal is to provide opportunities that encourage an active and healthy community,” Pelletier said.  “Anytime public access trails can be improved, it encourages usage and makes it safer for the users.”

The wooded area between the airport parking lot and the falls is owned by Fort Kent residents Joey and Janice Bouchard, who allow the public to access the falls through their property.

Fort Kent residents Shawn and Allison McVey allow the public to use a portion of the airport parking lot, which they own.

“We’re really lucky that these folks allow us to use their property,” Dumond said.

Incumbent Sen. Michael Carpenter and Rep. Harold “Trey” Stewart III, R-Presque Isle, are the expected nominees for their respective parties in this year’s election for a two-year term in District 2 of the Maine State Senate.
Apex Weather END_OF_DOCUMENT_TOKEN_TO_BE_REPLACED

High pressure will move east today while an upper-trough approaches from the west crossing the region tonight. A cold front will approach later tonight and cross the Valley early Thursday.
Our Sponsors END_OF_DOCUMENT_TOKEN_TO_BE_REPLACED