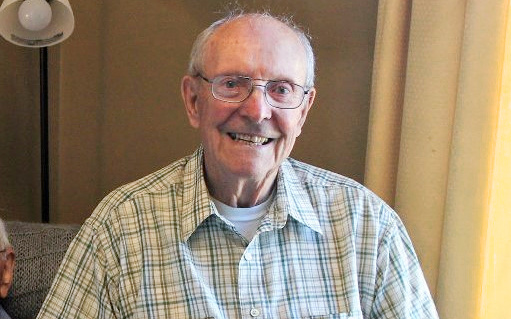 Jessica Potila, SJVT / FhF Staff Writer • September 19, 2020
The award is bestowed upon French citizens with exceptional military and civilian service to the country, and some foreign nationals including American veterans who risked their lives during any of the four main campaigns to liberate France during World War II.

The award is bestowed upon French citizens with exceptional military and civilian service to the country, and some foreign nationals including American veterans who risked their lives during any of the four main campaigns to liberate France during World War II.

Nadeau is a decorated World War II Army Air Force veteran who was stationed in England during the D-Day invasion.

The award is given to recipients with “eminent merits” who have demonstrated a flawless performance of one’s trade as well as doing more than expected.

Following his service, Nadeau returned to Fort Kent, where he worked for a local oil company, repairing and cleaning furnaces. He would later serve as director of the newly established wastewater department in Fort Kent.

Throughout the years Nadeau also volunteered his time to his community, including through the VFW, American Legion, Knights of Columbus, Fort Kent Fire Department, and the Fort Kent Senior Citizen Club.

Nadeau and his beloved wife, the late Geneva Michaud, were married for 68 years. The couple had six children.

The French Legion of Honour was established by Napoleon Bonaparte in 1802. Past recipients of the award include Charles Lindburgh, Elie Wiesel, Steveb Spielberg and Colin Powell.

In 2019 Maine Health Care Association selected Nadeau to receive a Remember ME award.

Joey Ouellette was the only one of three candidates for Fort Kent Town Council who participated in a public Candidate’s Forum held Monday, March 16.
Apex Weather END_OF_DOCUMENT_TOKEN_TO_BE_REPLACED

Showers are expected this afternoon continuing into the evening hours before tapering off overnight behind the front.
Our Sponsors END_OF_DOCUMENT_TOKEN_TO_BE_REPLACED