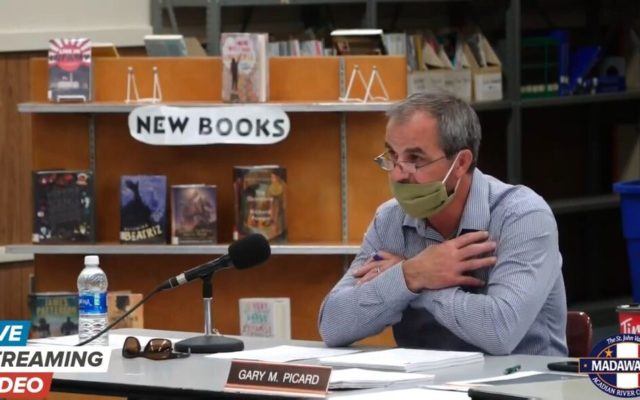 Morgan Mitchell • September 16, 2020
The Madawaska Board of Selectmen voted at its Sept. 15 meeting to retract a previous motion that would have cut $10,000 from the library’s budget.

MADAWASKA, Maine — The Madawaska Board of Selectmen voted at its Sept. 15 meeting to retract a previous motion that would have cut $10,000 from the library’s budget.

After a difference of opinion between the Finance Committee and Board of Selectmen left the library budget up in the air Sept. 2, Town Manager Gary Picard said he was going to figure out the language for the town warrant since the budget was recommended by selectmen but not the committee.

At the conclusion of the Sept. 2 joint meeting, the library expense budget decreased by $10,372 from $113,242 to $102,870. After much discussion and public participation, the Board of Selectmen approved the budget minus an extra $10,000. The Finance Committee did not approve the budget as amended at that meeting.

The library board went back to the drawing board and figured out where they could cut costs. Librarian Ken Theriault’s salary went on the chopping block and as a result he would have lost $4,500 of his annual pay.

When presented with this result from the library budget reduction, Selectman Jason Boucher said that in order to save Theriault’s salary, he wanted to retract his previous motion to reduce the budget by $10,000. He also said that the reduction in budgeting should be focused on decreasing operating costs, not salaries.

If the Finance Committee agrees, then the town warrant will read the same as every year, and state that the budget is recommended by both.

If the Finance Committee does not agree, Picard said he will need to look into what happens next and how the townspeople will be presented their options to vote regarding this department.

The final approval will rest with the townspeople when they vote on the proposed budget at the annual town meeting, which has yet to be scheduled. The amount of the overall budget was not available because the library budget has not been finalized.
An earlier version of this story said the $10,000 additional cut to the library budget would have taken $5,500 from the librarian’s salary, when it should be $4,500. It also said that operations would be reduced by $4,500, when it would be reduced by $5,500.

Incumbent Sen. Michael Carpenter and Rep. Harold “Trey” Stewart III, R-Presque Isle, are the expected nominees for their respective parties in this year’s election for a two-year term in District 2 of the Maine State Senate.
Apex Weather END_OF_DOCUMENT_TOKEN_TO_BE_REPLACED

Showers are expected this afternoon continuing into the evening hours before tapering off overnight behind the front.
Our Sponsors END_OF_DOCUMENT_TOKEN_TO_BE_REPLACED