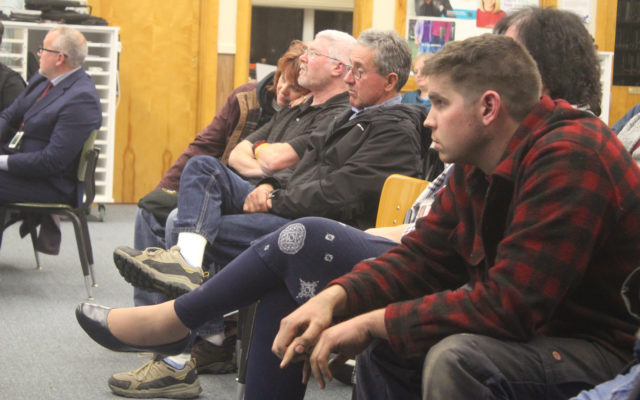 MADAWASKA, Maine — The three school units comprising Valley Unified Regional Service Center have until Dec. 31 to agree in writing to form a regional school unit if a proposed regional high school project is to move forward.

If no RSU is agreed upon, the St. John Valley loses the project.

Ben Sirois, Valley Unified executive director and superintendent of all three school units partnered in the project — SAD 27, SAD 33 and Madawaska School Department — shared the news at a Thursday evening meeting of the Madawaska Board of Directors.

Sirois, along with Valley Unified Assistant Superintendent Gisèle Dionne, traveled to Augusta earlier Thursday for an emergency meeting with Maine Department of Education Commissioner Pender Makin after SAD 27 board members expressed their intent to withdraw from Valley Unified.

Valley Unified was poised to receive up to $100 million in state funding for construction of a regional school building should the school consolidation process obtain final approval from the DOE.

“The commissioner would like us to try to continue and move forward and by the end of this calendar year have a signed assurance by all three districts that we are going to go into the RSU formation process,” Sirois said of the Augusta meeting. “And if we don’t, the project is no longer ours beyond that date.”

The SAD 27 Board of Directors expressed its intention to withdraw from Valley Unified in an Aug. 26 letter addressed to the other two school units.

“We acknowledged that SAD 27 is concerned about something we know needs to be resolved,” Sirois said of the Augusta meeting.

If SAD 27 successfully withdraws from VU, the other two school administrative units will not be eligible to receive state funding for the school construction project, said Sirois.

SAD 33 and Madawaska School Department would still be able to share administrative services as Valley Unified, he said.

Sirois echoed to the Madawaska board a suggestion he made to the SAD 33 and SAD 27 boards at their meetings earlier in the week, that the makeup of the Valley Unified board be based on community representation by town rather than by school district.

“I think part of the problem is that we keep comparing the three districts where we should be talking about the communities they represent,” Sirois said. “As long as you have MSAD 27 with five communities piping resources in, they’ll forever be able to say we pay 50 [percent or a larger] part of the share and I think that’s problematic because it doesn’t paint a true picture of what each of those communities share in those expenses.”

The 500-millibar upper-level trough associated with the cold front and low pressure that brought last evening's thunderstorms will slowly move over the Valley today and Thursday with a chance for scattered showers and an isolated thunderstorm or two across the Valley this afternoon.
Our Sponsors END_OF_DOCUMENT_TOKEN_TO_BE_REPLACED